We have just spent the past few days criss-crossing the country - mostly under cover of darkness – with our seven friends (who coincidentally happen to be wine-producers as well!). Early morning starts followed by long days were the format, and all rose to the occasion magnificently and went far and beyond the call of duty. 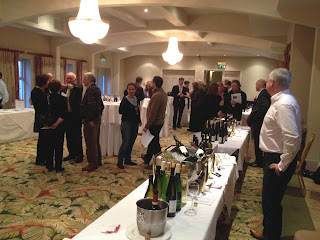 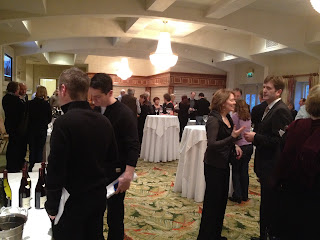 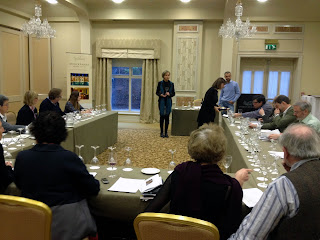 The wines were fantastic and the reaction to them equally positive. The Knockranny House Hotel team did a superlative job – the hotel was completely booked out, the Masterclasses booked out and the amazing 8-course Gourmet dinner, courtesy of Chef Seamus Commons, also booked out. 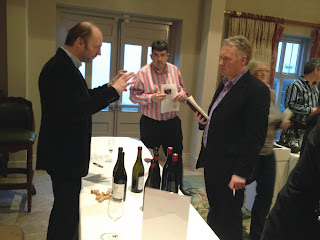 I was in school-teacher mode, gently nudging the group around and shuffling everyone from place to place, and as a consequence didn’t actually get to taste that much! At one point I got very scared when I realized I actually had a clipboard in my hand, so I spent the Saturday afternoon trying to casually “lose” it on various tables – all to no avail. 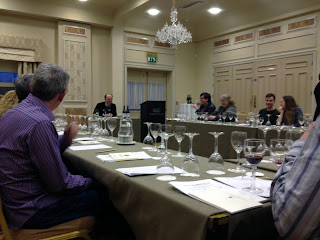 Aside from the high points with the Producers and their wines, the 5 minutes spent listening to my first Dawn Chorus of 2012 outside the Hotel at about 06:45 on the very calm and mild Sunday morning was wonderful. 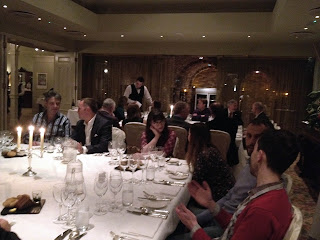 So a big thank-you to Anna-Rita, Bozidar, Renato, Gregor, Roland, Emmanuel and Jean-Marc for making the trip over.

Here’s a bit of background information about some of them….more to follow....... 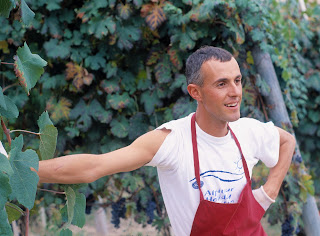 “Readers who haven’t discovered Cantina del Pino yet owe it to themselves to do so. Proprietor Renato Vacca is making some of the most compelling wines in Piedmont today. Along with Andrea Sottimano, Luca Roagna and Giorgio Pelissero, Vacca is one of the most promising producers among the younger generation in Barbaresco.”
Or
“This range from Cantina del Pino and proprietor Renato Vacca is one of the most impressive I tasted this year. Every wine from this small cellar in the centre of Barbaresco is fabulous. I can’t say enough good things about Cantina del Pino. I never turn down a chance to drink these wines, as they are exceptional.”

Both of the above quotes are from successive vintage reviews by Antonio Galloni of Robert Parker’s Wine Advocate. You’d think that they would create either a big-headed, arrogant winemaking monster (and let’s face it, there are a few of them around) or alternatively instil a fear of future failure (“how can I keep this up…”). Remarkably neither has happened with Renato Vacca – he just exudes enthusiasm for what he does, soaks up any feedback and is also genuinely interested in wines and winemaking techniques from outside Piedmont. He seeks an almost Burgundian elegance in his wines and he manages to tame the awkwardness of young Nebbiolo by working in harmony with his fruit – yes, there is oak – but also intelligent maceration, extraction and of course an awareness of optimum harvesting times.

At 7 Hectares, Cantina del Pino is pretty small, and there isn’t much wine to go around – but aside from the quality of the wines, there’s a fascinating historical aspect to the Cantina. One Domizio Cavazza was the director of the Royal Enological School in Alba from 1888 - 1913. When he arrived he surprised everyone by purchasing land and making his home in Barbaresco. The noble families expected he would reside near the more famous estates in Barolo. He purchased the Ovello cascina (farmhouse and land) and he began making wine. For the first time the wine made from the Nebbiolo vineyards surrounding the village was called Barbaresco. For the people of this area it was a huge compliment. Cavazza was very charismatic and an outspoken supporter of the farmers in the Langhe. He celebrated the birth of his first son by planting what became a well-known landmark in the region, a large Mediterranean pine tree. The estate began to be known as the 'cascina del pino' or winery of the pine.

Renato Vacca's great grandfather purchased the vineyards after Sig. Cavazza prematurely died and his family moved to Torino. The Vacca family have lived there ever since and in 1997 Renato decided the time was right to stop selling the grapes to the local co-operative and to make wine himself under the Cantina del Pino family name. Today – with the very same vineyards that were the first to ever produce a “Barbaresco” back in 1894 – he produces World class wines.

I have been lucky enough to spend quite a bit of time in Slovenia over the past few years – or Slovakia as my friends seem determined to repeat with infuriating regularity – so we have decided to re-name it Slovenakia to keep everyone happy. Aside from a problem with the country’s name, there is the delicate question of where it is – geopolitically. To many, it’s Eastern Europe, although many Austrians and Italians to whom it borders might be a little surprised at this. Decanter Magazine sidestepped the issue neatly by recently declaring Verus as one of the “Ten Best Central and Eastern European Producers” – when you think about it, that’s a pretty large geographical area, so no small achievement for Verus.

Slovenia has always had a pretty good reputation for wine producing – moreso White than Red. It’s a reputation that has waxed and waned with various fashions in what we like about wine – in the 1970’s the UK quaffed millions of litres (more than from any other country) of slightly sweet Laski Riesling. And then the fashion changed and Slovenia went into a bit of a tailspin and had to do quite a bit of thinking. In the West of the country, bordering Italy, they began to produce rich, full-bodied whites and hearty, thunderclap reds. However, over in the East, things are a lot more influenced by the southern Austrian region of Styria and the Pannonian Sea that washed over most of the land millions of years ago here and right up (through Hungary) to Bürgenland left a rich plain behind it. The winemakers in this corner decided to go down the fresher, crisper style for whites and in recent years have been gaining considerable recognition for their efforts. In the recent Decanter World Wine Awards, Slovenia won more awards pro-rata to entries submitted, than any other country in the world.

Verus Vinograd is a project that started only in 2007. But to assume that there are just 5 years of experience behind the project would be wrong. Three friends – Danilo Snajder, Bozidar Grabovac and Rajko Zlicar – came together to form the company having worked in different aspects of winemaking previously. Crucially, Danilo and Bozidar worked for the large local co-operative and believed in the potential that could be achieved by isolating key vineyards and producing smaller volumes of high quality wine. On leaving, they knew exactly where to go and who to approach – and promptly secured access to the best sites in the region.

The winery is 12 Hectares in size, with some additional contract vineyards where the trio specify the rigorous viticultural procedures that must be followed and then harvest the grapes themselves. They are obsessive about quality – on a recent visit I plunged my bare hand in to feel the cap of a fermenting vat of Pinot Noir, only to see Danilo’s shocked expression – and then all too late, his carefully gloved hands. But this care pays dividends too – for the first couple of vintages they bottled everything by hand, filling the bottles right to the very top so as to reduce the amount of air left, and therefore minimise the sulphur required. Even today, if you tilt an unopened bottle, it’s difficult to see the air bubble inside.

Jancis Robinson made their Sipon (Furmint) one of her “Wines of the Year” in the Financial Times and their Sivi Pinot has picked up a very dedicated following closer to home. There is an as-yet unreleased Pinot Noir in the pipeline.

The idea of making wine is a relatively romantic one – the image of gently pressing perfectly ripe grapes under your soft-skinned feet, with the juices flowing evenly into vats and magically fermenting themselves into wonderful wines is a pretty common dream. The reality is somewhat different: pestilence, hail, snow, wind, stuck fermentations, flooding, uneven flowering, near-permanent bankruptcy and a myriad of strange-sounding chemical faults should be enough of a reality-check to put most people off. But how about taking on all of the above and deciding you still wanted to make wine – but with a grape variety that had never been bottled on its own until about 15 years ago? One that had always been used as a blending variety. The juicy, succulent variety Blaufränkisch intrigued Roland Velich – as did many other things – e.g. swimming against the mainstream, true expressions of terroir at the geographical extremes of winemaking, expressions of perfume and elegance from the fruit rather than power and opulence and many other ideals.

I began reading about Roland and his wines whilst I was trying to figure out whether or not we had a stuck fermentation with our own Slovenian Modra Frankinja (Blaufränkisch) and I was Googling late at night for people who’d had experience with Blaufrankisch. I think I Googled “best Austrian Blaufrankisch” and the name Moric came up time and time again. I was fascinated with the information – here was someone who had a singular vision to produce a very specific style of wine with a variety that most had beaten into submission by extraction and drowning it in oak to hide the sour cherry and “lighter” characteristics – yet he believed in emphasising the purity, minerality, perfume, acidity, delicacy and fine tannins of a variety that many would consider was not capable of producing such layers of complexity. He had researched possible vineyard sites in forensic detail and settled on an initial two vineyards some 10km apart in Burgenland – Lutzmannsberg with its clay, sand and loam soil and 90y/o low yielding vines and Neckenmarkt with its slate and limestone soils and 82 y/o vines.

His first vintage was 2001 and in his own words the reaction from his critics and peers was “relatively unanimous: we’ve got something lean and wispy, it’s got relatively little alcohol and relatively little new wood. No new super-Burgenländer. Of no great interest.” But he had achieved his desired delicacy – a balance between tannins, acids and alcohol – and those outside Austria began to take notice. Then came 2002, a magnificent vintage and by this time open-topped wooden vats had been added for spontaneous fermentation with natural yeasts followed by ageing in large 500L and 1,000L casks. The world was beginning to notice. The arrival of David Schildknecht (of Parker’s Wine Advocate) to taste the 2004 vintage (which he reviewed very positively) was followed by his reviews of the 2006 vintage to which he awarded the highest marks ever (if you’re counting points) to an Austrian red wine. Suddenly other Producers were interested in this more “elegant” style of Blaufrankisch.

Back in the dim glow of my computer screen I decided to email Roland and see if he was interested in having a visit from a curious Irishman. He agreed and I went along with another Slovenian winemaker – a 7 hour round trip. I was hugely impressed by the wines – they were the first set of wines I had tasted in a long time that were so multi-layered – they just unwound and revealed themselves in their own time. Nothing big, broad, brash or blousy – just amazing depth to the wines. It only struck me afterwards that we spent almost three hours tasting only 5 wines! You can make comparisons to top Pinot Noirs from Burgundy (perfume and finesse), Syrahs from the Northern Rhone (spice and herbs), Nebbiolo from Piedmont (tannin structure) – but above all, Blaufrankisch is unique.