It’s Bordeaux Primeurs time again….. the time when the majority of the Classified Growth (and many other) Bordeaux Chateaux release their most recent vintage for sale to the Trade – in this instance the 2011 vintage. The only catch is that the wines won’t be available for another 2 years – they’re still in barrels at the respective Châteaux. The upside (normally) is that by stumping up early, you can get them at an attractive price, so that by the time they are physically in bottle you have saved yourself a few quid based on what you’d pay two years from now. Plus you can acquire some of the more limited and sought-after wines.

The 2011 vintage faces a few challenges in the marketplace though. Firstly, it follows quite possibly the two best back-to-back vintages since 1989 & 1990. Secondly, the reaction from the critics has been less than enthusiastic, with most of them rating it an “average” vintage. But the elephant in the room is the pricing. After two stratospherically priced vintages for admittedly stunning wines, how will the Chateaux price their wines?

It seems to me there are two options:
Or

So far, it looks depressingly like the second scenario is the one being played out. The few releases so far have shown small decreases on 2010 prices, but nothing to get excited about.

There seems to be little reason to rush out and buy any of the 2011’s, particularly if it looks like they will still be available for a similar price in two (or five) years time. If you already have some 2009’s and/or 2010’s to look forward to, there is no reason to buy 2011. If you don’t, then you still don’t need 2011 – just find some delicious 1998’s or 2001’s, the majority of which will be below the 2011 release prices and are drinking beautifully now.

If the Châteaux decide to play the game of chicken and sit it out with high prices, the next group to suffer will be the Negociants and traders. There’s obviously money to be made selling Primeurs when the demand is there. But the customer is (and should always be) first and the thought of “pushing” an average vintage on customers this year is rather unappealing to us – even if it means a loss of revenue. I’m a big fan of Bordeaux and we get great allocations and sold a huge amount of the 2009’s and 2010’s. To be honest though, we have plenty of delicious Blaufrankisch, Burgundies, top German Pinot, quirky Italians, tasty Languedocs, and so on to get behind in the absence of anything exciting from Bordeaux....

But there are some who depend on selling Primeurs slightly more - for an important injection of business into their annual turnover.

This morning, for example, Chateau Beychevelle was released by Negociants in Bordeaux at €45.50 to the trade – a not insignificant price. As with any release, the emails from European merchants began to arrive almost immediately…..

“The good news this morning is the release of Beychevelle at a sensible price. With its iconic label of a sailing boat, this famous Saint Julien is very popular in Asia where it is known as "Dragon Boat Wine…."

“New this morning from the Medoc, Beychevelle, which is beloved by the Far East because of its distinctive dragon boat label….”

Is it just me, but does trying to sell a wine on the basis of what’s on the label and whether or not Asian people like that label, smack slightly of desperation?

They do mention the price as being the "cheapest in the market", but in reality it's only about 15% below the 2010 release price and a staggering 100% above the 2008 release price!

There must be some objective tasting notes out there somewhere that might be better to mention….. oh yes….

“A little on the lean side and maybe slightly lacking in flesh and fruit. Not as polished and charming as usual. A touch lean and short.”
or
“It has crisp acidity and firm backbone with a grainy, masculine, tobacco tinged, tapered finish that is a little raw at present.”

Hmmmm……. But of course, you've always wanted a wine with a Ship on the label haven't you…..

To be honest, I don't really blame the merchants. It's the whole system whereby the Chateaux are trying to extract the maximum value before the wines enter circulation, and therefore offering minimum incentive to the final consumer that is at fault. The merchants are just middlemen, albeit getting a little desperate.

It’ll be an interesting campaign..!
Posted by Liam Cabot at 3:51 PM 1 comment:

This month's Decanter magazine landed in the postbox yesterday - complete with a special supplement on Austria and a rather complimentary review on the Moric Blaufrankisch 2010 that we import and have been raving about for a while... 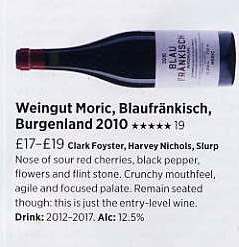 19 Points and Five Stars is pretty excellent, but it's the "Remain seated though: this is just the entry level wine" that I really like!

If you want to read a bit more about Roland and his wines, have a look at a previous post on Wine Weekend - Moric - you need to scroll down through the Post.
Posted by Liam Cabot at 12:27 PM No comments: