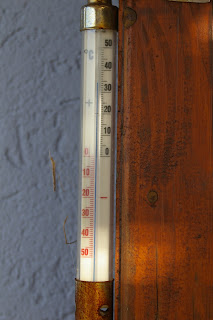 It has been hot here in Slovenia - very hot! I know that may sound attractive given that Ireland has apparently just had the coldest summer since 1947. Back at the end of July we had about 10 days of relatively cool temperatures - even as low as 10 Celsius at night. At the time, we felt it was probably a good thing as it would allow the vines to slow down a little - they were about 14 days ahead of previous years at that point.

Now the opposite is happening - daytime highs in the shade are as high as 38 Celsius - and at 2am the other night it was 27 Celsius! A local winemaker told us the daytime temperature in amongst the vines (i.e. in the sun) was 63 Celsius! This is not so good for the vines, or the grapes. What seems to happen is that they begin to shut down - there is plenty of water in the soil, but it's just the searing temperatures that are causing them to batten down the hatches. And there's a big difference between slowing down and shutting down - in the case of shutting down, the sugar levels stop rising, yet acidity continues to drop. Not great for the aim of harvesting phenologically and physiolocically ripe grapes. 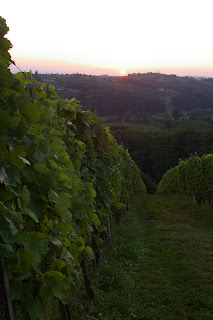 Grapes tested this morning on the two rows of vines we have "converted" to single guyot do show increased sugar levels - up to an average of 60 Oechsle. But those on the double-guyot vines have slowed, or even stopped - the vines are struggling to deliver sugar to the higher volumes of fruit - and they are still around the 47 Oechsle level.

Of course, the heat brings other considerations. Two things happened to us for the first time - the first we should have anticipated: we left a bottle of wine in the back of the case, only to return to find the cork and bottle separated! And a smell of wine throughout the whole car - should be interesting next time we face a random police check!

The second incident was less predictable. It would seem the heat shattered, or burst, the rear window on our car. At first we thought it must have been deliberately broken, but the detectives among you will notice that the force that broke it came from the inside - and pushed the glass outwards. All the other windows were open - but this one was closed and we guess that the glass must have expanded slightly - and given it was shut tightly, had no other option but to shatter under pressure. It'll be interesting to see what the insurance company says...... 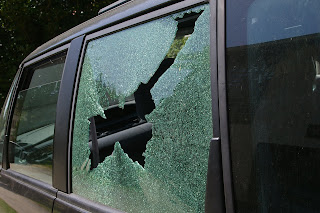 Posted by Liam Cabot at 3:32 PM No comments: 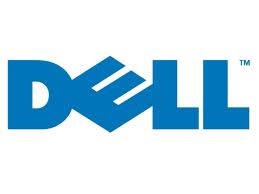 I'm a bit of a luddite with many things technical. The computer games I grew up with were "Pong" and, well.... "Pong". But I pride myself on the fact that I have just about mastered an iPhone (although I'm not sure it was worth mastering) and I'm not too bad at some basic networking. We also run all our phones over VoiP with a great Irish company called Blueface and can therefore make "local" calls from here in Slovenia.

Occasionally I miss some calls, but most people then use voicemail - that's what it's there for! I get a bit suspicious when I can look at the call history and see an "unknown" number calling repeatedly, but not leaving a message. Today I happened to answer a call from one of the many recent "unknowns". Turns out it was from Dell - to tell me that the 1 year warranty on a Dell PC I purchased exactly a year ago is about to expire - today. I was told that the "motherboard" might fail, the graphics card could take a heart attack, the processors could seize up (can they seize?) - anyway, all sorts of ailments were about to hit my PC - but of course I could take out an extended warranty (at a special price of course) to protect myself against this Armageddon of computer bad luck that was heading my way as soon as the crappy 12 month warranty expired.

And that's the problem. I can buy a car with a seven year warranty included - and that has thousands of moving parts and will jolt along the Irish roads year after year. But I can't buy a computer in 2011 without the manufacturer being confident enough to offer a warranty beyond 12 months? So much for advances in technology. The only moving part in a computer (I think) is a fan - what's the big deal about making the rest of the stuff robust enough to last with some form of certainly beyond 12 months....?

And as for the people calling continuously to offer this extended warranty with all the warnings of failure, doom and gloom - what does that do for Brand confidence? I'm certainly not that confident about buying Dell again if they're that worried that I really need an extended warranty.

If I were Mr. or Mrs. Dell (is there still one?), I'd get the people off the phones straight away and get them doing something more useful - like working on how to ensure their computers might just make it past their first birthday.......

Posted by Liam Cabot at 5:27 PM No comments:

Although we had a patch of rain at the end of July, and some unseasonally cool weather, the vines continue to race ahead - we estimate they are somewhere between 10-14 days ahead of where they were at this stage last year. Reports from around Europe suggest early harvests everywhere, with some producers scrambling back from holidays and frantically contacting casual labour to prepare for the harvest. 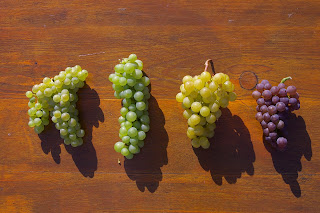 Back in our little corner of the world, things are early, but we still have at least 7-8 weeks to go before the harvest for Sipon and Riesling - and a lot can change in that time. Above are samples of the grapes and the various stages that they are at - Laski Riesling on the left, then Sipon, then Muscat (the most evolved) and then...... an interloper! Some delicious Zweigelt (a clone between Blaufrankisch and St. Laurent) - there are a couple of random vines throughout the vineyard - all we have to do is try and keep the deer away from them!

A quick check back to some pictures from the same time last year shows huch much more evolved the grapes are at this point:

In particular, the Riesling is much more advanced, even though the vines are towards the bottom of the hill.

Fingers crossed for the next few weeks - just a little tweaking and then a lot of watching and waiting.... 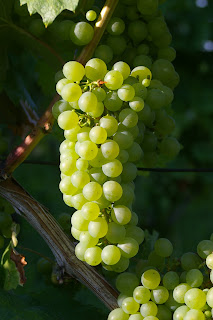 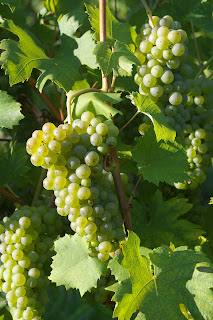 Posted by Liam Cabot at 9:20 AM No comments: 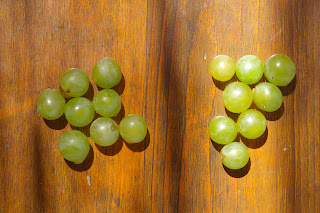 Two sets of grapes – the same variety (Sipon), same soil, same vineyard and picked randomly from the same side of two adjacent rows 1.5 metres apart. They may look the same – but they are very different. Back in February, Sinead pruned two of the rows in the vineyard in the single-Guyot method – the rest of the vineyard has always been double-Guyot.

Based on a quick sample this morning, the results are quite dramatic. The grapes on the right are from the single-Guyot sample and have higher sugar at this stage (47 Oechsle) – but also piercing acidity – making them taste more complex and unevolved – but with more potential (so we think!). The grapes on the left from the double-Guyot pruning have lower sugar (25 Oechsle) yet taste “sweeter” and seem to be “simpler” at this point.

It will be fascinating to see how the two evolve over the coming weeks……..

Posted by Liam Cabot at 2:24 PM No comments: