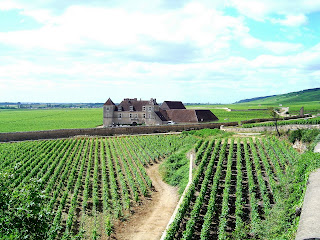 Back in November, Sinead, I and John Wilson travelled to Burgundy for our annual visit to the Producers we work with. More detailed notes on the individual tastings will follow, but it’s worth starting with a brief overview.

Undoubtedly 2010 is a great vintage for both Reds and Whites. Since the growing season in the Summer of 2010 and the subsequent harvest, reports had been filtering out about the high quality of the fruit. But that’s not to say it wasn’t challenging for the Growers. An irregular – but prolonged - growing season delivered fruit that was both phenologically and physiologically ripe but the density and concentration of the grapes meant that care needed to be taken with extraction, maceration and elevage in the barrels – reduction during the elevage has been a recurring challenge for many growers.

Stylistically 2010 is very different to 2009. Where the 2009’s Reds have fleshy opulence with a broad mouthfeel, the 2010 Reds have a deeper, concentrated core of ripe fruit and instead of being broad and voluptuous, they are dense and multi-layered. The Whites are classic, taut, minerally and exhibit grapefruit-style fruit characteristics rather that the riper, smoky lime fruit style of the 2009’s.

But these are broad generalisations – and generalisations are often dangerous. The question that everyone seems to want answered is: Is 2010 is better than 2009? For us merchants a simple “Yes” would be great – but to be honest it’s not that simple. For the Reds, the peaks of 2010 are definitely higher than the peaks of 2009 – but there are considerable variations in the overall quality levels of the 2010’s and the 2009’s are a more homogeneous group. For example, I feel that both Meo Camuzet and Emmanuel Rouget produced better 2009’s than their 2010’s.

The best 2010 Reds have an amazing crystalline core of sweet (and I mean ripe, not sugary) dense red fruits that are amazingly concentrated and that linger for ages on the palate. BUT there are some less impressive reds that exhibit slightly worrying levels of extraction and reduction (we tasted barrel samples - racking prior to bottling will certainly “freshen” up the wines, but it depends to what extent they revert to this state in bottle – a lot depends on the lees that they sat on for the past 15 months). In these cases, the same producer’s exuberant 2009’s are definitely preferable.

The best 2010 Whites have that classic racy acidity balanced by slightly less “showy” fruit that the 2009’s – but in a more pure, linear style. There is less evidence of oak on the palate, not necessarily to do with changes in elevage, but the way in which the density of the original fruit has withstood the impact of the barrels. There is very definitely a lot to like in the 2010 Whites.

Overall – if one does need a generalization to hang the vintage on – I’d say the 2010’s tend to express their individual terroirs more, whereas the more flamboyant style of the 2009’s tended to obscure the detail of the terroir differences. As to where they sit with other vintages, I’d say the Reds are closer to 2005 in ripeness, with a hint of that very desirable 2008 freshness. For the whites, similarities with the minerality and purity of 2004 come through, allied to a bit of extra ripe fruit in the vein of 2007.

As an aside, it has become slightly fashionable to write down the 2009’s, with some describing 2009 as a more “simple” vintage and 2010 as a more “pure” Burgundy vintage. Whilst this may be a marketing necessity of those trying to sell the 2010’s, it’s unfair to pass such a simple judgment. Wine is ultimately about pleasure – and uniquely with wine, it’s also about when one derives that pleasure. The 2009’s will be more enjoyable at a younger age – and there are literally hundreds of delicious wines at entry level that will provide enjoyment to both the Burgundy beginner and long-time fan equally. The 2010’s will take more time, and there isn’t that uniformity at “entry” level, but the best 1er and Grand Crus will provide undoubted great pleasure many years down the road.

So what about prices? Well, conventional theory would normally tie prices in some way to the volume of wine available. For 2010 this produces a bit of a challenge as yields were down by up to 30%, so prices should rise. However we are also in the middle of a minor economic hiccup (!), so that needed to be taken into consideration by the growers. On the other hand, the voracious appetite of the Chinese buyers for all things wine-related has apparently turned from Bordeaux to Burgundy… So you can see quite quickly there is no rhyme or reason to 2010 pricing. Some of the producers we work with have kept prices almost the same as 2009 (Pierre-Yves Colin Morey and Jean-Marc Millot – take a bow), some have reduced ever so slightly (Meo Camuzet – take a bow), and others have increased (Mugneret-Gibourg - Hmm…although their quality is stunning and they would most likely argue they have been underpricing for years).

As to the Producers we tasted with, the Whites of Pierre-Yves Colin Morey really were outstanding and we’re very lucky to have our allocation. For the Reds, the complete range from Mugneret-Gibourg were the highlight of the visit – certainly a notch higher than their excellent 2009’s – only lack of volume will make these allocations painful to manage. Potentially less painful, definitely less expensive and nonetheless impressive were Jean-Marc Millot’s delicious reds.

More detailed impressions from each of the producers we visited will follow.
Posted by Liam Cabot at 12:00 PM