Of course, there’s still an “old” vineyard to look after as well. It’s easy to be seduced by the excitement of planting new vines, but the annual cycle continues in the rest of the existing vineyard.


Pruning is one of the most important tasks as it sets the “template” for the growth of the vine during the coming season. Some producers prune prior to the Winter – November pruning is common in . Others prune in the Spring, and that would be more common here.

The challenge for us is predicting when “Spring” actually will be – driven by the desire to find inexpensive flights. Let’s just say that pre-booking cheap flights and anticipating Nature don’t go hand in hand! So back in February we landed in rather wintery, snowy conditions!

Let’s just say there were a few curious glances from the locals (who of course had the luxury of waiting until the snow melted) and no doubt a few comments about the “mad Irish” as we waded up and down through the vineyard in the deep snow.

But it was great fun – snow is actually very warm to work in – and we developed a theory that actually pruning in snowy conditions is much better for the vines as the cold weather minimises any chance of disease developing.

Sounds plausible……just....
Posted by Liam Cabot at 1:26 PM No comments:

The title sounds like something straight out of Star Wars or Total Recall!

Back in the mid 1800’s a disease spread through ’s vineyards, destroying almost two thirds of the continent’s vineyards. Needless to say panic set in, and the origin was eventually found to be a small insect that attacks the roots of the vitis vinifera vines called Phylloxera. It quite literally wiped out most of ’s vineyards within a couple of years. Frantic research traced the origin of the louse back to , but also uncovered the critical discovery that American vines seemed resistant to it.

Enter the amazing skill of grafting. By taking an American rootstock, resistant to Phylloxera, and grafting a European vine onto it, European wine growers could begin to re-plant their vineyards and maintain the original vine’s character and quality. Those vineyards that hadn’t already been destroyed were also ripped out and re-planted. An enormous task.

Today, virtually all of ’s vineyards are planted with grafted vines. There are a handful of “pre-phylloxera” or deliberately planted ungrafted vineyards, but phylloxera is still a very real threat and the producers coaxing these vines to produce fruit every year acknowledge the scale of the challenge. Bernard Baudry’s amazing “Franc de Pied” Cabernet Franc that we import is made from ungrafted vines, but Matthieu recently acknowledged that Phylloxera is claiming more and more vines and they are slowly losing the battle and the wine will most likely not feature as a single bottling any more.

So effectively every single vine planted today is a grafted vine, involving two very different aspects: the vitis vinifera variety (the vine itself – generally called the Clone) and the American originated  (phylloxera resistant) Rootstock that it is grafted onto.

This can offer a bewildering choice of options for the producer. Take Pinot Noir for example: there are over 20 commonly/commercially available clones. Some offer high yield (the amount of fruit the vine will produce), some promise low yield. Some flower early, some late. Some are good for sparkling. Some originated from specific regions. All have very sexy names such as Clone 777 or Clone 828 (classic Burgundian clones). A quick look here will give you an idea of the some of the Pinot Noir options available: Some Pinot Noir Clones

Or you can choose a grape variety that seems to have a very limited choice. We soon discovered that Blaufrankisch / Modra Frankinja was one of those! The search for information is not helped by the variety’s origins in – a country whose language is completely impenetrable. Blaufrankisch (Kekfrankos in ) is an “autochthonous” variety – one that is a result of natural cross breeding or mutation in a particular region and generally has a unique association with just that region. Although it is generally believed to be a cross between Zweigelt and , detailed information about different options for planting were very limited given that it is unique to a relatively small region. Any commercially available clone requires someone to have actually decided to produce that clone – and know what characteristics that clone will offer.

We hit the road on the search….. and quickly realised how difficult the task was. Some of the encounters were hilarious: a vine nursery proudly showing us pictures of the Blaufrankisch vines they had available – vines laden down with high yielding, dilute grapes – and when we pointed out that we wanted low yield, low vigour, we would told “don’t worry, the photo is wrong (!), these are definitely low yield”!! Yeah, and we’ll only discover the truth three years from now when the vines mature after a lot of hard work….

We finally found a nursery that seemed to at least have some options available. Many producers want a high yielding clone (of any variety) – lots of volume, fruit and a higher income if you are selling it e.g. to the local co-operative. Some people can look at you a bit strangely when you tell them you want a plant that isn’t going to produce that much fruit….. So we finally found a clone called KT3 which seemed to offer low yields and open bunches. Out of 500,000 grafted vines produced annually by this one nursery, just 10,000 were of KT3, so little is the demand for a low yielding clone.


The second element is the rootstock. Again, there are many choices available. Low vigour, high vigour, rootstock for clay soil, sandy soil, limestone etc. etc. I have to say that Nigel Greening’s opinion (owner of ) makes the most sense to me: of course, pick a rootstock and clone close to your requirements, but ultimately those vines will adapt to the unique soil that they are planted in. The result is ultimately what one could call terroir: the marriage between the planted vine and the soil. So we chose a relatively standard rootstock called Binova – low vigour and a good all-rounder.

All of this requires planning – and trust. It’s October at this stage and the vines need to be booked for planting in May. Generally by the end of October a nursery will have sold everything, they don’t want to produce plants that won’t be sold. They will be grafted over the winter and all we will receive boxes of long think sticks, with wax seals at the end of each, concealing a tiny bud that will burst out in the Spring and bring with it the hope and expectation of many years of wonderful Modra Frankinja.

But we won’t fully know what we have got until long after they have been planted in the soil. It’s a trust thing….
Posted by Liam Cabot at 9:08 PM No comments:

Sometimes you have to go back to go forward....

In this case, back to October last year - and the start of planning for a long term project. Since tasting Modra Frankinja / Blaufrankisch about 4 years ago, we have been continually impressed by the variety - and the potential for growing it here in this region.

We were initially enthused - and hugely influenced - by our experiences with Roland Velich of Weingut Moric (Profile here....) and whose wines we are lucky - and proud - to import into Ireland.

This region here in Slovenia has traditionally been a white wine region, but red varieties are becoming more common. Of course, there are the "sexy" varieties like Pinot Noir, but we're not convinced about its potential here. Modra Frankinja (the Slovene name for Blaufrankisch) has one of the longest growing times - from flowering to harvest, and it produces a lovely, juicy fruit that even in high temperatures can retain a wonderful acidity and elegance. Of course a lot is also determined by what happens in the cellar, but to us, "MF" should be silk, elegant, juicy, long and characterful - not unlike a strange hybrid of Pinot Noir and Syrah.

So last year we decided we would clear an old vineyard and plan for planting young MF vines. The wine-growing year is never quiet (except perhaps in August) so we had to fit all the work in around harvest time. Working established vines is a true skill, but there's also something fascinating, and ultimately skillful about preparing land that will host the hopes and expectations of generations of winemakers in the years to come. What we do/did will set the groundwork for whatever wines we enjoy out of bottles in the years to come....

One of the most fascinating aspects of the early preparatory work was seeing what soil - and rock - structure we had. The whole region is part of the old Pannonian sea bed, so although we are hours from the coast, we easily found old sandstone and fossils in the soil. We have heavy clay of anywhere between 1 metre and 3 metres depth over this seabed base. This gives us a perfect combination of water retention in the long, dry Summer and yet the complexity of minerality that will feature as the vines age and the roots burrow their way into the old seabed. 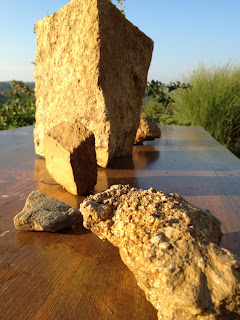 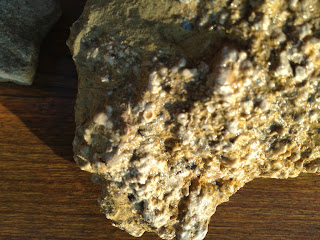 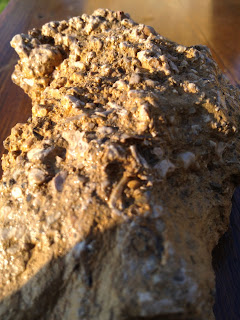 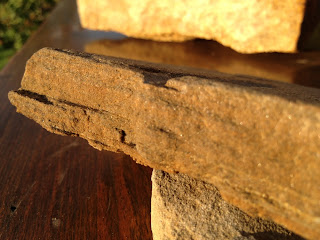 After all that, we had to go looking for the right clone and rootstock - something that proved a little more challenging than we expected.....
Posted by Liam Cabot at 11:30 AM No comments: 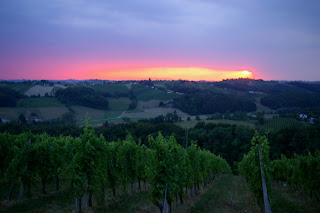 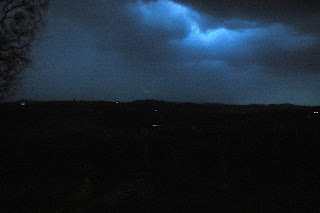 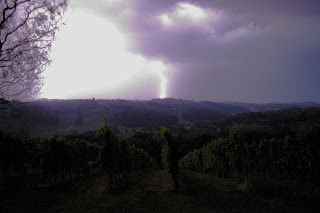 But thankfully no hail...

Somewhere between 35 and 45 mm of rain over about 12 hours. Good enough to keep the vines - especially the young ones - going.

Now it's sunny and warm. Most importantly we have a good breeze which will dry the fruit and reduce the chances of oidium.
Posted by Liam Cabot at 11:36 AM No comments: 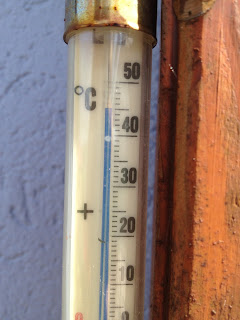 Bloody hot in fact. Somewhere just over 40 Celsius in the shade – and over 50 Celsius in the direct sun in the vineyard. I know many vineyard regions in France have been hit by devastating hail, but our challenge here in Slovenia right now is the heat. 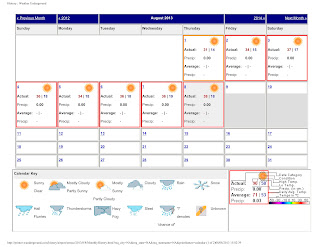 It hasn’t rained since June 24th and the total rainfall since the beginning of June has been a paltry 19mm. That’s not much to produce a couple of tons of juicy grapes per hectare.

But vines are pretty hardy things, and the shoots till stand tall and proud, even in the afternoon sunshine. We have our own storms forecast from tomorrow and Saturday and we are holding our breath in relation to hail.

In the meantime, we’re all hiding inside – and this is the first chance we have had to catch our breath and update the Blog for a while.