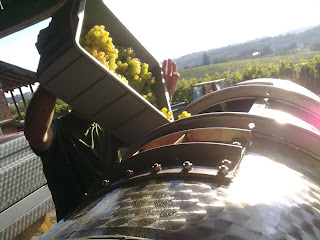 Next morning at Miro’s cellar, we pressed the Sipon early in the morning – a true “cold press” at just 13 Celsius. We also pressed the whole bunches – no de-stemming – so that we could try and increase any available acidity – which was a little low at 6.3 g/l. 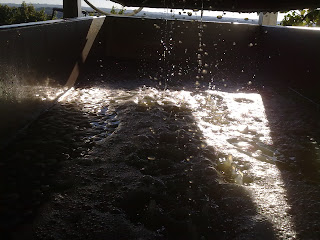 It was all then pumped into our steel fermentation tank and again chilled for a further 36 hours to let everything settle. We decided we would ferment on the heavy lees (we didn’t rack the juice off prior to fermentation) and stopped the cooling on the Sunday evening and added some inoculated yeasts. Miro’s own Sipon is naturally fermented, so we wanted to try an artificial yeast instead.

But the big question was acidity. Again, many viewpoints were exchanged. A lot of local winemakers would have 7.0 g/l as a target and the obvious suggestion was to acidify by adding tartaric acid – totally legal and practised in many countries. The other consideration was that, unlike red wine fermentations, the acidity level tends to drop a little during a white wine fermentation – there being no skins and pips for the yeasts to extract some extra acidity from.

Both Sinead and I were against this though – although not philosophically opposed to acidification, we just wanted to see how it would turn out without any intervention. We needed to understand how what you start with evolves into a finished product. Miro came up with an interesting suggestion to add some gently opened grape skins from his own Sipon so that there would be some minor maceration and acidity extraction – but we also decided against that.

What we did know by now is that we should have harvested earlier. Instead of sugar levels being a target, we should have used our instincts and gone with acidity and flavour for our guide. As sugar levels rise during grape ripening on the vine, acidity drops. If we had harvested earlier, we would have preserved acidity and could have chaptalized (added sugar) easily. Sugar is pretty simple stuff, and the yeasts convert it to alcohol in a pretty straightforward way, but there are many, many acids in a wine that produce a kaleidoscope of flavours and the addition of one single acid (e.g. tartaric acid) is a bit like using a mallet to tap a tack.

So our yeasts began their long and wonderful journey to alcoholic bliss without anything extra to contend with. Temperatures remained low – never broaching the 20 Celsius mark – and fermentation was nice and slow. However the flavours began to change from a straight fruit juice style (which is what unfermented juice is anyway) with hints of apples, to a more crunchy-pear style flavour. One major criticism of cool fermentations in white wines is that they can develop a “pear-drop” style flavour and that typicity and individuality can be compromised. Certainly Miro’s Sipon tasted more of the classic grapefruit style – but ours was a long way behind in fermentation terms and the residual sugar was hiding many of the subtleties and nuances of the final flavour composition.

I also took the opportunity to sit down with Ivan to try and sort out our differing opinions about how we had harvested the grapes. We have a huge amount of respect for him and the work he puts into tending the vines while we’re not there but, as I explained, we also want to experiment and try some new ideas. It turned out to be a great meeting. What had really rankled with Ivan was the fact we had discarded some less than perfect bunches on the ground during the harvest - even leaving them on the vine would have been better than just throwing them away. It seemed to him to be a vinous two-fingers to his hard work during the year. I hadn't realised the sensitivities involved and although we will both undoubtedly still harvest differently to each other, we also understand where the other is coming from. It was a relief to discover there would be no crying over spilt grape juice.

After 15 days the Sipon is still fermenting away slowly – almost there, but not quite yet. The acidity seems remarkable good and we’re really happy we didn’t acidify after all. Having tasted a couple of other producers’ wines who did acidify, the jarring, brutal attack of the acids just doesn’t seem to work – particularly since the flavours and aromatics are delicate in the first place.

Sinead will be back next week to rack the wine off the lees once fermentation has finished – and only then will we get a proper taste of the final product.
Posted by Liam Cabot at 9:11 AM