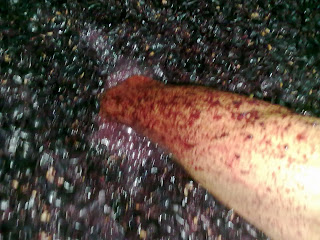 Back in early September, when Sinead and I were planning our respective trips for the Harvest, the plan was that Sinead would come first to harvest and vinify our own Sipon (Furmint). I would then arrive about 10 days later and harvest and vinify some Modra Frankinja we had agreed to buy, as we don’t have any MF vines ourselves. But Nature again conspired to change things a little and it turned out that the MF reached optimum maturity earlier than the Sipon, so Sinead found herself immersed in sticky red stuff rather than sticky clear stuff! 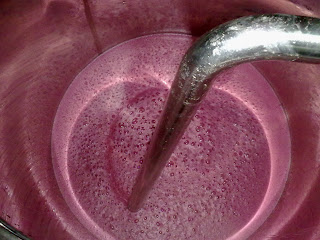 We have been interested in Modra Frankinja for a while now. Known more commonly as Blaufrankisch (in Austria where it is planted more widely) it is a variety that we believe has great potential here in the clay-dominated soils of Jeruzalem. It is a late ripening variety, with vibrant fruit aromas of sour cherry, fruits of the forest , herbs and spices. On the palate it is savoury, with an elegance not dissimilar to a hypothetical blend of Barbera and Pinot Noir. Some would include descriptors akin to a Syrah, or even Nebbiolo, but our preferred style is the fruit-forward, savoury cherry/plum style. It can handle oak reasonably well, but larger, old barrels tend to accentuate the finer characteristics better, rather than a whack of new oak.
A couple of local producers grow Modra Frankinja and we had been to visit one vineyard back in August and agreed to purchase just over half a ton of grapes at harvest time. Sinead was there on the day (Thursday September 22nd) and ended up with exactly 677 kilos of grapes being dropped off at Miro’s cellars. Quality was excellent, with no rot. Sugar was 91 Oechsle which is bang on the nose for a 12.5% alcohol wine. So things were looking good. Acidity was 5.5 g/l and Ph 3.41.
We had decided in advance that we would vinify it in different batches – primarily to look at how different fermentation procedures impacted on the final wine. The grapes were de-stemmed and split into two batches:
Sinead did punchdowns on both batches twice a day. By Sunday 25th fermentation had started in the larger Box – no added yeast, just whatever came in on the grapes. Temperatures during fermentation rose no higher than 24 Celsius and the main part was finished by Thursday 29th – so just under a week from picking to when we decided to Press. At that point we had sugars of about 30 Oechsle (effectively a dry wine) and we decided that we had enough extraction and tannins to proceed with pressing – we didn’t want too much extraction. 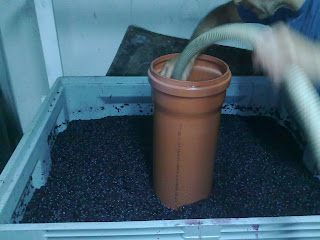 Meanwhile, in our steel tank, things were moving a lot more slowly…. in a good way. We had already decided that we would inoculate this batch with a cultured yeast – one normally used for Pinot Noir – again, too see how it would impact on the final wine as a comparison. On the Sunday evening (after 4 days cold maceration) we stopped the cooling and added the yeast. Fermentation took another 2 days to get going, so by now we were about 6 days behind the Box fermentation.
So by the Thursday, from the same harvested grapes, we had one batch (the Box) almost finished the main part of fermentation and being Pressed – and the other (the Steel) just really beginning…. both had punchdowns twice a day, but already it was clear we had two very different wines….
Posted by Liam Cabot at 3:11 PM