If we were worried about nutrients and temperature before, now we had even more cause for lengthy analysis. By taking away the skins, and putting the juice into a colder cellar, we had set our yeast friends a pretty hard task to finish the job of fermentation. Things slowed down even more, and a week later I chickened out and agreed with Miro that we needed to try raising the temperature a bit – a stuck fermentation is not something that you really want. On the other hand, do you really want one of these things stuck into your wine? 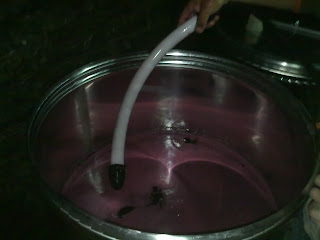 So we raised the temperature by 2 degrees to 18.5 Celsius – but no nutrients were added. It seemed the yeasts were just happy to plod along – and if they were happy, I was happy.

In the middle of all this, I had contacted a winemaker called Roland Velich based in Burgenland, Austria. He’s the man behind the Moric wines and to say that he is passionate about Blaufrankisch (Modra Frankinja) would be an understatement. We arranged to go and taste with him. The visit warrants a separate report, but suffice to say briefly that the wines stunned us. Comparisons have been made to Grand Cru Burgundies, and although there are definite similarities in terms of texture and mouthfeel, the wines showcase the unique characteristics of low-yielding Blaufrankisch – wonderful dark, sour cherry fruits with amazing floral aromas and multi-layered palates that leave you still tasting, and savouring, the wine minutes later. Yet they are not blockbuster wines – they are elegant, poised, precise and utterly seductive. We spent 4 hours tasting and talking about just 6 wines – and the 6 hour round-trip journey was well, well worth it. We returned to Slovenia inspired!

Back in Miro’s cellar our own MF was moving at a glacial pace – but we were happy to leave it that way. The question of what we would do next loomed on the horizon and the question of barrels arose. Miro had some old oak – 5th use – barriques and we decided we would move the two batches of Free Run juice into them and then could also continue to compare their evolution in barrel. 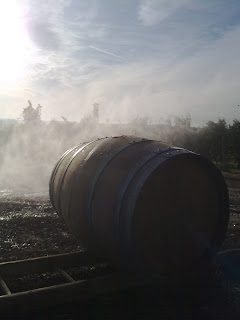 Cleaning barrels is a slow, challenging process. I had attempted to clean them myself, but wasn’t happy with the aromas that remained from their previous use. Miro intervened and after a few hours with a steam cleaner, many cold water rinses and lots of “juggling” the barrels to slosh around the water later, we had two useable barrels.

Yet this decision was my one crisis of confidence. For whatever reason I really wasn’t happy about putting the wines into barrels. I had grown used to their respective flavours and really enjoyed the “clean” fruit-forward style of the wines combined with refreshing, clean acidity and fine tannins. I wasn’t really sure of I was ready to wave goodbye to them - it was like watching a child become a teenager – not really sure how they were going to evolve.

As if my own lack of self-confidence about what we were doing wasn’t enough, we encountered another problem. And here’s a Top Tip for any budding winemaker: always know what size your barrels are before you start filling them! Sounds simple….. but a 220 Litre barrel can look amazingly like a 250 Litre one – particularly as they can all be different shapes.

We always knew we would be a little short on Steel Free Run juice to fill one of the barrels, but we were going to top it up with some Press juice. However as the steel tank emptied and the barrel showed no signs of being anywhere near full, we realised we had made a fundamental error in calculating the size of the barrel. That sinking feeling was horrible. Not only had we moved the wine (exposing it to oxygen and giving the hard-pressed yeasts yet another challenge), we were left with a batch of wine that, left that way it was, would certainly degrade. Stupid, stupid, stupid – and I cursed the moment we had decided to move the wine – I should have left it to Sinead who was due back in a week – and then it would have been her problem!

But one person’s misfortune is often another person’s gain – and it was off to the local toyshop in Ljutomer to buy some glass marbles. Not just a bag or two – but 50kg of marbles. They can be put into the barrel and used to raise the fill, ensuring that you have a “full” barrel. My request was met with a combination of surprise (I think they definitely thought I was mad) and the desire to sell me more marbles in a single day than they probably sell in a year!

As I write this, the marbles are on order and will be cleaned and added to the barrel in the next few days. The wine in that same barrel is still fermenting – slowly as ever – but the yeasts have hung on in there and are almost finished – some 3 weeks after starting. And the wine is truly delicious – honestly!

In the back of the car are some small jars of samples of each wine for Sinead to try when I get back. She’ll then go back out next week to finish off a few things and put the wines into hibernation for the winter. And also to make some “Champagne”……!

Oh yes, and we did make some white wine too. More to follow……
Posted by Liam Cabot at 6:56 PM