Two years ago I wrote a Blog about the problems that can arise when neighbouring vines aren’t looked after – I called it Rotten Neighbours (Rotten Neighbours). To my surprise it became our most viewed Blog – not because I think people are interested in the challenges of inter-vineyard oidium spread, but more because quick look at Google analytics showed that many people are obviously doing searches for “Rotten Neighbours”. Says a lot for the community spirit…

Incidentally, our second most popular Blog (isn’t Google analytics great!) was about luxury Champagne and contained the all important keywords “Cristal” and “Ace of Spades”. If I just add “sex” to this one, the combination of all of the above should ensure many people without any interest in wine whatsoever will stumble across this post….

Anyway, for anyone with some interest – or who hasn’t given up reading by now – you will hopefully be pleased to know we have new neighbours. And more importantly, they have an interest in returning their vineyard to a workable and cared-for state. 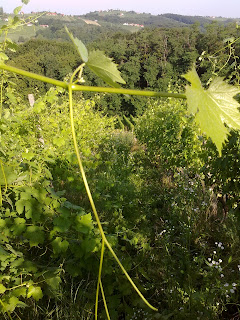 My enthusiasm for supporting this approach led me to offer to help out in clearing the vineyard. There are lots of pleasant things in winemaking (not least drinking the finished product), but there are many undesirable tasks that should always be avoided wherever possible: shovelling pressed pips and skin from a finished press onto a trailer along with ten million fruits flies is a good example. Climbing inside a press to clean it along with same flies is another. Clearing a vineyard is also now a good contender for a high ranking. It’s all done manually as a tractor can’t even get into the vineyard because it’s so overgrown. Sweat, sneezes, scratches, bites, trips, sore arms, sunburnt face, soggy shorts, itching, tears (almost), salty skin (from sweat), thirst, stings, blisters, aches and many more whingy ailments contribute to making it an “interesting” experience for a soft-skinned Irish lad. 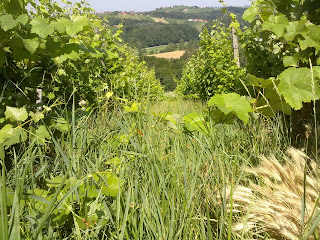 But underneath all that jungle of growth lay something rather special – or at least potentially rather special. A vineyard that hadn’t been sprayed regularly – and thus free of a build-up of insecticides. A vineyard that hadn’t been artificially fertilised for years. A vineyard where the vines, through lack of attentive pruning, had in many cases found a natural, low yield for the fruit. And of course, plenty of rot. But great potential to start afresh next year….. In the meantime, Miro decided to green harvest all the fruit with the exception of 1 bunch per shoot. It’s a risk given the dangers of the last bunch getting rot, or being hit by hail – but if it pays off (and it has so far), some very interesting wine could be produced from it….

And so we wave goodbye to the Rotten Neighbours – and hopefully hello to a hole new bunch of readers who came looking to find out how to solve that awkward problem of neighbourly music being played too loud, unsociably late parties, rubbish being dumped in the garden… and of course luxury Champagne and sex….