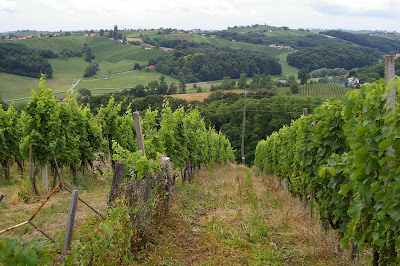 It has been a quiet couple of weeks. July and August are normally pretty pedestrian in the vineyard – a bit of trimming excess growth, stripping away some excess foliage and spraying. The hum of the tractor going through the vineyards can be heard all around – most people spray every 10 days or so for peronospera and oidium (powdery mildew).

I have stood in Grand Cru vineyards in Burgundy on many occasions and marvelled at the fact that a producer can own just a few rows of vines, producing just a barrel or two of juice, and be surrounded by other growers also doing their own think to coax fruit towards optimum maturity from their own vines. I’ve often wondered what happens if the neighbouring rows are less well attended to, or if one is biodynamic and the other is a chemical monster? Surely there must be some overlap or overflow of techniques impacting on the neighbouring vines? It’s something producers can often be remarkably reticent to talk about: why, if you are espousing the merits of biodynamicism, mention that the chemicals being sprayed on the vines next to yours have a direct impact? The reality is that adjoining rows of vines all share the same microclimate, and all human intervention certainly has an overlapping effect.

In our case, it’s a lack of intervention. The pros and cons of what you actually use to spray or treat the vines aside, the reality is that they do need some form of attention. Our small vineyard adjoins neighbours on both sides. On one side the vines are under a caretaker arrangement – with what seems to be a rather lazy caretaker. A recent stroll down the perimeter of our vines revealed a rather scary outbreak of oidium on the neighbouring vines – due to lack of attention. Remember, these are supposed to be white grapes! 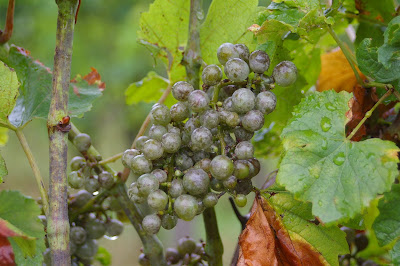 More worryingly, it had spread the 1.5 metres or so onto our own vines and the side of the row facing the neighbour’s vines has all become infected. A rather depressing session of dropping rotten fruit ensued. 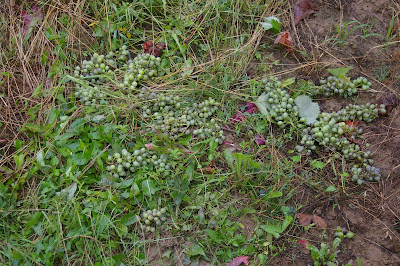 It’s not really the done thing to call up the neighbour and give out about they way they are managing their vineyard – after all, it is their vineyard and if they want to make rot-infested wine, it’s their choice.

But do remember that when you are cracking open that bottle of biodynamically produced Grand Cru Burgundy that has been crafted from a mere 4 rows of vines in a shared vineyard such as Clos Vougeot, that the neighbour might just has sprayed their vines with chemicals to within an inch of their death which will travel by air, and leach through the soil, into your own wine. Or that slightly “funky” flavour could be an interesting mix of rot, powdery mildew and peronospera…….
Posted by Liam Cabot at 9:59 AM