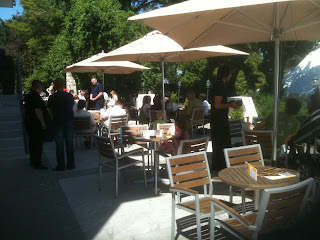 Another long journey – but at least this time the train driver didn’t get lost (yes, it can happen….We Made It) and we arrived back in Slovenia on Saturday. Much to the delight of the kids, we went straight to a Wine Fair! The Salon Jeruzalem is the annual presentation of the new vintages by the key local producers.

Actually, the kids weren’t delighted at all – and proceeded to start running amongst the producers playing “kill the sibling” much to the bemusement of everyone else who seemed to have sensibly left the kids at home. We got to taste briefly with a few producers (most notably some excellent Rieslings from a producer new to us, Emile Trop) and then we decided that not only did we look like errant parents, but also we were beginning to act like them. So goodbyes were said, promises were made to follow up with visits and we headed off.

Twenty four hours later and I was sweating in the vineyard, wielding a pair of secateurs and waving them fiendishly at the worried-looking vines. Sinead had been over in February for some pruning and had decided on the spur (no pun intended) of the moment to change a couple of rows from double-guyot to single-guyot, so it took a little while to get my head around what I was actually looking at! A bit like riding a bike after a long break – you know you can still do it, but the fear of publicly falling off keeps the adrenalin pumping.

Much, much more to do over the coming days….
Posted by Liam Cabot at 11:35 AM