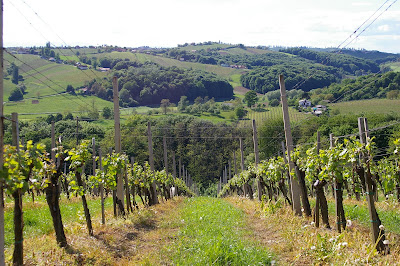 Well, we made it!

Three days in a car, three kids, one wife (still!), two ferries, one train and some 2,000km later and we’ve arrived in our little corner of Slovenia. This isn’t supposed to be a travel blog, but there were two important things to note from our journey:
a) You CAN drive a car over 2,000km with a worn rear bearing, but the noise does get quite loud towards the end….even drowns out the kids, and that’s quite an achievement!
b) I’ve never been on a train before where the driver got lost. Honestly. We went to bed somewhere near Neu Isenberg (no I don’t know where it is either) and expected to wake up in Villach at 06:30 the next morning. Instead, we were awoken by the very efficient German train driver telling us that he’d had to take a diversion in the middle of the night due to fallen cables and now we were somewhere in Austria, but he wasn’t sure where….. absolutely true! Since he was also towing a whole load of cars, he couldn’t go through many tunnels and he kept having to change the engine from one end to the other (as obviously trains can’t turn around) but fair play to the guy – he got out a map, figured it out, criss-crossed Austria and got us to Villach – only 8 hours late!
So we’re here for the next 4 months – except for me who will be shuttling backwards and forwards to Ireland (this time by plane) to keep everything moving along on the business side of things. And in between, there are kids to get to school, vines to be planted, vines to be pruned, last year’s wines to be tasted, a mountain of stuff to learn – and all with a few glasses of wine along the way!
Posted by Liam Cabot at 4:05 PM