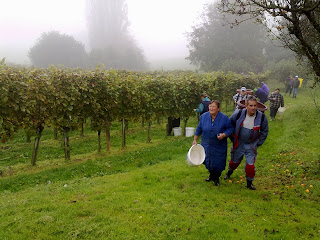 Everyone is out harvesting today – it’s probably the last “big” harvest weekend of the season. There are groups of cars parked up among the vines as you wind your way along the roads and the vineyards are full of people picking, eating, talking, drinking and gesticulating.

At this stage, most people have harvested their Sauvignon Blanc, Chardonnay, and Pinot Blanc grapes and are working on either Riesling or Sipon. The heavy rains in September have undoubtedly caused problems and there is rot in vary degrees almost everywhere. But there is also some positivity among the winemakers – although one friend pointed out that this could be because everyone has become accustomed to how bad the rot is, that what would normally be considered bad, is actually now OK! 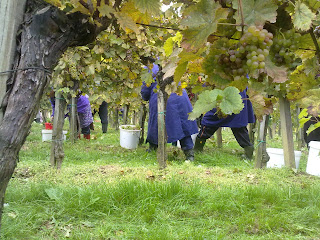 This morning I was over at a neighbour’s harvest picking Riesling. In general the grapes weren’t in too bad condition – the problems really do seem to vary from vineyard to vineyard.

Everything kicks off in the early morning mist with a hearty breakfast. If you can get a few rounds of bread, some cold meats, warm and tasty klobasa (huge sausages), a few spritzers and the odd schnapps into you prior to starting, then you’re well set up for the morning! 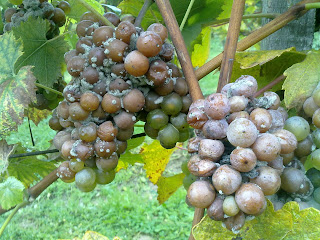 Everything in the region is picked by hand, so you get one of two jobs: either picking the grapes, or transporting them back to the press by way of big buckets on your back. This morning it was picking for me – and it was a great opportunity to see the grapes up close. At first glance, the rot looks devastating, but there are definitely degrees of spoilage. A certain amount of “bloom” and shrivelling is not too much of a problem providing the grape was ripe in the first place. The ones to watch out for are either totally dried “raisined” grapes with no juice (and therefore very little to add except “off” flavours) or those that have actually split and begun to ferment whilst still on the bunch. To me these are the worst and if they finish fermentation whilst still on the vine they actually smell like very stinky French cheese – almost like Epoisses – desirable with wine, but not in wine!

Of course as you work your way slowly up the hill refreshments in the form of a mobile spritzer team are always on hand. The odd spritzer definitely keeps you going, but recent medical studies have shown that the amount of spritzers consumer whilst harvesting is directly linked to the number of fingers lost by accidentally snipping them off. Luckily I lost none this morning, so still a full 10 for tomorrow (or as my kids keep pointing out: 8 fingers and 2 thumbs). 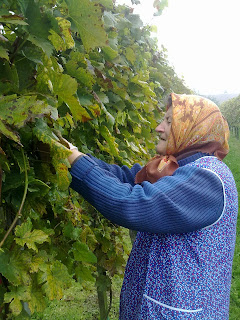 A finish at noon was followed by a (not so) light lunch – meat, potatoes, bread, soup, rice, salad – more hearty stuff.

Already I think it’s possible, in my limited experience, to form an early opinion on the vintage. There are certainly some very good grapes, and many potentially very good wines – but it’s a question of how, or if, the good grapes will be mixed with the very bad stuff at harvest time. Sorting isn’t a universal procedure and many of the wines are produced to be sold as “open” wine with only a percentage of them being bottled to be sold both domestically and internationally. But it’s the huge potential of the region that has always fascinated us, and the belief that in time more and more producers will move to bottling their own wines. However in a vintage like this, the economic challenges of quantity over quality are still tempting to some.

The question of ripeness is also an issue. Whilst Sauvignon Blanc and Chardonnay will probably be OK, getting fully ripe Sipon has been a challenge. The harvest is a full week ahead of last year (through necessity) and sugar levels are not quite there yet – so the local controlling body has authorized chaptalisation. Without added sugars prior to fermentation, the alcohol levels would be working out around 9 degrees alcohol, with very high acidity.

Again, the stark reality of winemaking is very much in evidence. It’s all very well to eulogise about natural wines – but what do you do when you have the choice of either producing an unripe wine, or a rotten one? If your income depends on it, then something has to give and chaptalisation has to be considered as an option.

Tomorrow it’s our own harvest.