Do Good Looks add to the taste of Wine?

Having said that all was quiet a week or so ago, we’ve had a spurt of activity over the past few days. We have had many early morning sessions in the vineyard giving the vines their final major haircut prior to the harvest in October.

Actually this is pretty back-breaking work. Shuffling down a very steep incline, with your left arm raised up high grabbing the top shoots and then your right arm up equally high, snipping them off. Try keeping both arms above your head for a few hours and you’ll get the idea! 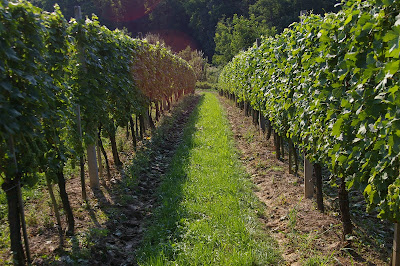 The other task was to strip away most of the leaves from the Eastern side of the vines – the side that only gets the morning sunshine, and open them up to a bit more exposure. Again, done manually, this is a time consuming task, but it really allows you to look at each vine individually and get an accurate idea of how the fruit is coming along.

The whole issue of whether or not to trim the top of the vines instigates a bit of debate. Some winemakers prefer to leave the top shoots to grow, so long as they don’t get too long to drop back down over the vines and grapes. The reasoning is that the newer shoots, and more importantly newer leaves, photosynthesise more efficiently and contribute to better sugar levels in the grapes. 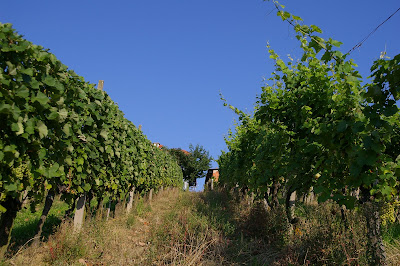 And the argument against this method? Well, it looks a bit messy!

Seriously though, there are those who believe that the vineyard must look perfect. Our own decision was led largely by Ivan who has worked the vineyard for over 20 years – this is the way he has always done it, so who are we to argue with him! But we don’t think it will make that much difference this year – the weather has been generally good and we haven’t had any hail like last year, so the vines are in good shape and are working well anyway – with or without a haircut. In a bad year, with the vines struggling, the extra “growing power” would definitely be more important. 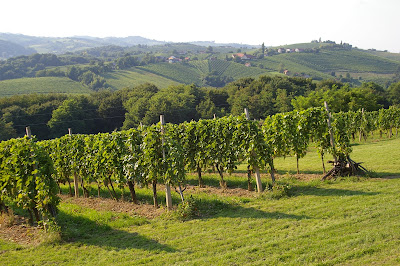 However, ever curious, we decided to try a brief taste test and sample some of the grapes – and compare them with some from another vineyard that leaves the shoots to grow. The result? Everything still tastes bitter! Inconclusive at this stage…….

Well, there was one exception – the Muscat grapes are absolutely delicious right now – and very much liked by the local deer. We’ll be keeping our eyes peeled for any intruders. 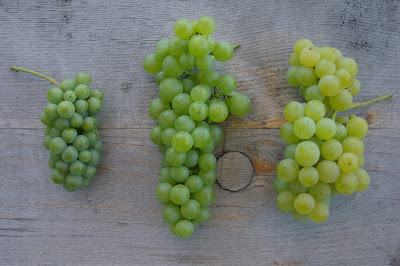 The difference in the various stages of ripening can be seen from the three bunches above – on the left is Riesling, centre is Sipon and the right is Muscat – all from our vineyard.