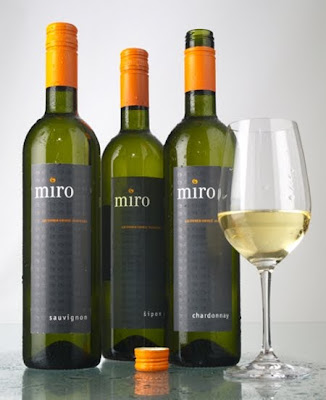 Last week we got the opportunity to taste Miro Munda’s 2009 range of wines in his cellar. We have been importing Miro’s wines into Ireland for 3 years now and the wines have been very successful with a growing customer base.

Miro is also a firm friend now, so a tasting with him is a great opportunity to talk about winemaking in general and to offer feedback and input in a constructive manner. He exemplifies the newer generation of winemakers here who haven taken on the family winery and revolutionised the way the wines are produced – releasing the potential that the land and vines have to offer. One of his first stops was to form a co-operation agreement with the Polz brothers’ winery across the border in Austria (only 40km from here) and they continue to work closely together today. Like many of the younger winemakers here, he has studied oenology, so conversations between himself and Sinead can often sound like Professor Bunsen Burner meets his Slovenian cousin!

He is also continually experimenting and always has a tank or two of some new project underway. This year it’s a fresh Rosé, last year it was a fantastic first red wine – a Modra Frankinja. He has gradually moved away from using oak – in fact it’s mostly used on his wonderful dessert wine, Fuga Mundi and has reduced sulphur levels to minimal amounts.

The wine we import most of is his great Sipon – pronounced “shipon”. We have had many discussions about labelling of wines from this region – for example, Sipon is actually the same grape as Furmint from Hungary. When we started working with Miro we were keen to keep it labelled as Sipon so that the local name is associated with this region and therefore builds awareness of the area as a whole and the various indigenous varieties. We get great satisfaction that his Sipon is listed in places like Doonbeg Gold Club, Rosleague Manor and the Knockranny House Hotel – rather than as a “Furmint”.

His 2009 Sipon was as good as ever with a nice hint of grapefruit and nice zingy fruit. We actually tried three different tanks with fruit sourced from different vineyards and it was fascinating to see the differences. The final result will be great.

The 2009 Renski Riesling was also wonderful – and stole the tasting that particular day – ripe, crisp and nice stony minerality running through it.

New this year was a bone dry Rosé made from Modra Frankinja (Blaufrankisch) – very light pink in colour with a hint of strawberry on the nose - but lots of fruit and amazingly complex for what looks like a “simple” wine.

We have a great interest in his “red” project – a juicy, succulent, very more-ish red wine made from Modra Frankinja. His first vintage was 2008 and it has been in barrel for about a year now – with classic polished nose and smooth fruit, but also showing some signs of maturity at this stage. His 2009 is still in tank and has much more “jammy” primary fruit and a dense core of dense, black fruits. The big decision is how long it should go into oak for….

We think Modra Frankinja has great potential – it has some similarities to a Pinot Noir in terms of body weight, but has a very pure, precise, juicy flavour profile with nice spicy characteristics. Miro has just planted a new vineyard with the variety, and I think we’ll start to see a lot more of it around here.