Green Harvesting - Or Not? 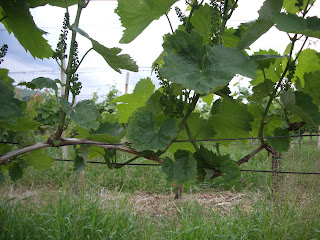 I’ve never had a handle on this. Now is a good time to make a stab at getting to grips with it. There are so many theories about if, when and how to prune vines during the growing season. Whole bunches are removed to allow just the right amount of fruit to draw on the precious limited resources of minerals and other nutrients that the roots work hard to access from deep in the ground. The dilemma between quantity and quality comes into play.

The first thing I learned, and I suppose the thing that is at the heart of the matter is this: each vine decides how many bunches of grapes it will produce depending on its age, health and circumstances (soil, climate, etc…). Not unlike the decisions we make when starting a family, the difference being that when the going gets tough, the vines can drop fruit so that the remaining bunches stand a chance of making it to ripeness! The vines and the winemaker begin a dance as the grapes are groomed for greatness. Tough decisions must be made for the ultimate prize…terroir in a glass.

The following theory makes a lot of sense… timing is everything. Only after the vine becomes woody, close to harvest, should excess bunches be culled from the vine. This woodiness signals a return of the sap to the ground as the plant prepares for the winter. What is left in the spur (see picture above) is a larder of nutrients for the grapes to draw on until they are picked. If some bunches of grapes are removed at this stage then there are less mouths to feed and those lucky few can share a supply of food to keep them in good shape and produce mature well-balanced individuals.

If , however, bunches are removed from the vine while the wood is green and sap is in plentiful supply, the remaining grapes will draw up more water from the roots and swell to compensate for the loss of volume. These individuals will be big but a bit clueless – unfocussed and dilute. A sandwich short of a picnic… you get the picture.

That is one theory regarding fruit management. Next to consider is when and how to get of excess leaves. 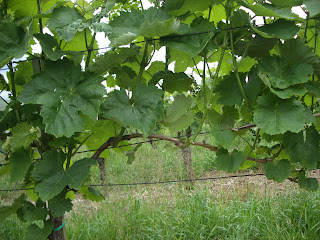 Canopy Management
Last year a short but violent hail shower early in the growing season shredded the leaves of the vines exposing the delicate skin of the young grapes to an ever increasing hot sun. Later shoots bearing young healthy leaves which would normally have been removed, (the vines are usually given a ‘haircut’ later in the season), were allowed to remain on the plants, these leaves acting as an extra pairs of hands to allow effective photosynthesis.
The weather imitated an old vineyard tradition. The philosophy behind this practice is that grape skin, much like our own skin, builds up a tolerance for hot sun if given incremental exposure. The result is a richer, concentrated and balanced cocktail of chemicals in the skin and in the flesh.
It’s comforting to know that with all our technology and progressive science we aren’t as clever as we think we are! The wisdom of age is gentle and quietly assured. While each generation rushes to discover a new better way, perhaps we should slow down and ask the old boys a few questions. We can then apply the science… but the result is still the same.
The old girls are there too, unfortunately they’re harder to find.
Posted by Sinead Cabot at 5:17 PM