Just back from a whirlwind week in Ireland – more on that to follow. Straight back into the vineyard to do some de-budding. Sinead was here back in February for some pretty chilling pruning at -10 degrees Celsius and now that the growth spurt is on, the focus has turned to de-budding any excess buds before they grow too much and waste the vine’s energy. At least, that’s the theory. 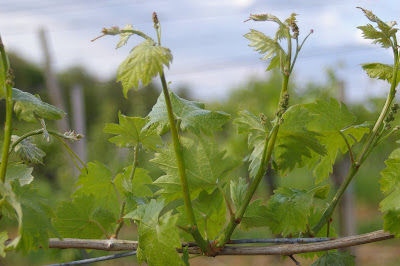 I had a very interesting conversation with someone outlining a philosophy that no matter what you do, or don’t do, in terms of pruning and de-budding, the vine will ultimately find its own natural equilibrium and only produce the same amount of fruit. Interesting theory, but we’re still at the “tweak the vine” school of approach here. The photo above is a pretty extreme example of a double bud – essentially two shoots that sprout from the same bud. You have to go through the vineyard and check it vine by vine for excess buds. Most are tiny and easily “rubbed” off. Others are bigger and you have to decide which of them offers the best potential for producing the right amount of fruit – a sort of vinous grim Reaper. It’s laborious, slow work and I’d forgotten how heavy your head is if you let it hang over your shoulders bending down for hours on end. 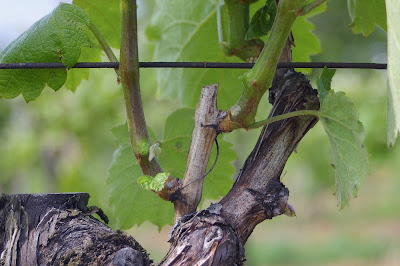 The other dilemma is to make decisions for next year – this viticultural approach works two years in advance – pruning and de-budding for both this year and next year. Back in February two stems will also have been chosen to form the “spurs” for next year that will ultimately produce buds and fruit. Each of these spurs needs to have two shoots so that when it comes to pruning next February, the winemaker will have choices and can determine what is best at that stage. If you knock off a crucial bud at this point (i.e. now), then there isn’t much left to work with next year….. Amazingly you become very aware of what you’re doing very quickly!
Posted by Liam Cabot at 3:40 PM