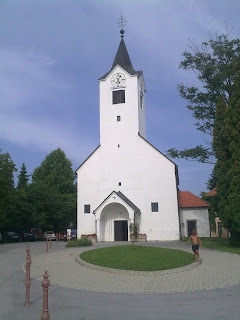 Last weekend was the turn of our local community in Kog to host their Wine Festival, or “Dnevi Turizma” as they call it. Actually the “tourism” term is a bit of a misnomer as the weekend is primarily frequented by locals who participate in both the organising and enjoyment of the activities. It is great for us to be a part of such a small, local community – we’re pretty much the only “outsiders” here.

The weekend also coincided with the Feast of the Assumption on the Sunday, so it was a unique mix of religious and wine-related activities. Unsurprisingly, the two intertwined very neatly together! 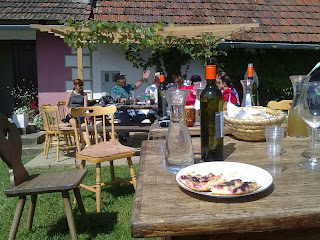 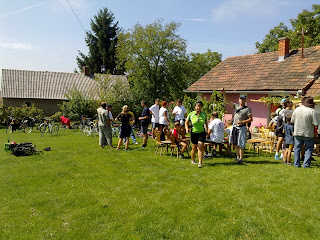 The weekend started with a family cycling “expedition” on the Saturday morning – a loop of about 8km up and down the local hills that involved a couple of stops for refreshments at local wine producers along the way. It was a really relaxed, enjoyable affair with great wine, food and lively conversation along the way. The tractor support is something every family outing should have! When tired of the hills, throw the bike and children into the trailer! 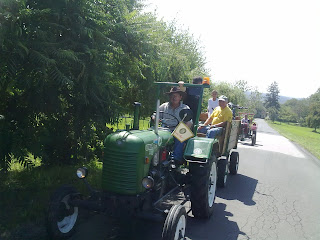 Later that afternoon the focal point was the local area outside the church and school where wine tastings, food sampling and good, hearty local dishes were on offer. Again, all for the benefit of locals. 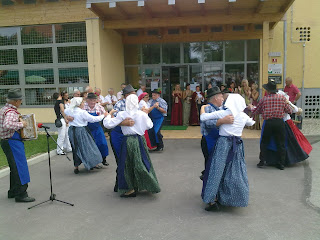 On the Sunday the more religious influences came into play. An outdoor morning Mass at a local shrine was followed later in the afternoon by the Stations at 3pm at another shrine – in fact, probably the best setting ever for a Mass, under the drooping branches of a weeping willow tree, with more tables laden with bowls of goulash and plenty of spritzers for after the mass. 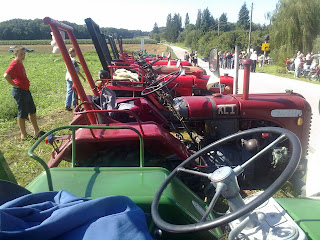 The other key aspect of the weekend was the installation of the local Windmills, or “Klopotec”. Traditionally the vanes and mechanical aspects (i.e. noise-making) are installed over this weekend and the hills now resonate to the sounds of thousands of the wooden hammers hitting the wooden panels on each windmill. They are very much a cultural symbol of this region, but also an effective bird-deterrent – just as the grapes are beginning to get nice and sweet! 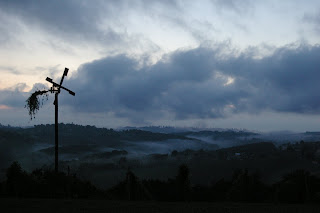 The irony of course is that it was billed as “tourist” event, when effectively it was the 150 – 200 of the locals participating – and from our perspective, all the more enjoyable for that. Of course, “tourists” include people from the next parish, so there must have been a few of them too! However, in an area that historically involved all sorts of different cultures laying claim to the region (part of the former Austro-Hungarian empire) it is ironic that it’s the other areas of Slovenia (mostly western) that are thronged with the international tourists.
It’s not to say the potential isn’t here – it’s absolutely here in spades with the beautiful scenery, vineyards, good wine, food and above all, welcoming people. A visit to the Polz winery a few days later just over the border in Austria demonstrated what “wine tourism” can bring to a region in a very positive way. And undoubtedly it will happen here in time.
But for the moment, our little corner remains wonderfully undiscovered and predominantly “local”.
Posted by Liam Cabot at 11:20 AM