What with all the travelling and sampling at this time of year, when it comes to sitting down to open an actual bottle of wine to enjoy, the selection tends to be a bit more eclectic and the hunt is always on for something a little different. 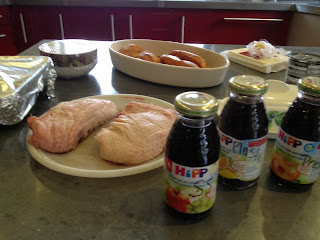 First up was something very different! Sinead is just back from Slovenia where she has been pruning the vines. An unseasonally warm start to the year meant she was late (as far as the vines were concerned!), but all seemed good by the time she left. There was also the small matter of checking our wines that had been sitting quietly in Miro's cellar all Winter. As you can see from the picture, brining samples back on the plane isn't exactly a glamorous activity - washed and sterilised baby food jars are the best option! We had the three different Modra Frankinja (Blaufrankisch) cuvees to try: "SS (Stainless Steel)" was the cold-soaked version, "Plastic" was the one fermented in open crates and "Press" was the combined press juice from the two. Of them all, the one tasting best was the "Plastic" - normal fermentation using natural yeasts in open containers - lovely complexity. The "SS" tasted much more primary, and more "juice"-like (rather than wine). The "Press" one was tainted by baby food! They still need to undergo malolactic fermentation, so some more changes to come....

All were washed down with some of our own duck breasts - a very tasty treat! 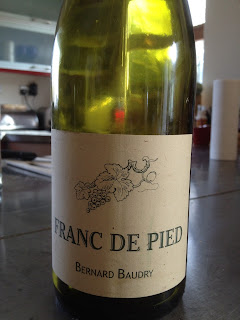 A few nights later I was rummaging around trying to find something different an I unearthed a bottle of Baudry's Franc de Pied 2002. I'm a huge fan of all the Baudry wines, and had completely forgotten we had this. It's a relatively rare/unknown cuvee made from a parcel of un-grafted (i.e. pre-phylloxera) vines in the Clos Guillot vineyard. In short, it was stunning. This would give any Bordeaux over €100 a run for the money - yet I think it cost about €10. It could pass blind as a top elegant Graves. Must try and find a few more bottles. 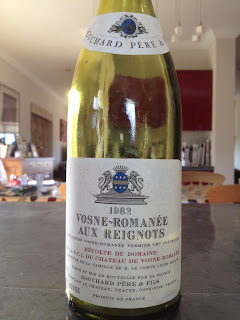 Finally, something purchased out of curiosity at auction: partly because I couldn't find anything particularly positive about the 1982 vintage in Burgundy and partly due to the combination of producer and vineyard. We have imported the wines of Louis Michael Liger-Belair and they are now amongst the most sought-after red Burgundies around. Yet many of the vineyards only returned to Louis Michel's direct control over the past decade - some of the most prestigious (including La Romanee) had been leased out to Bouchard. This particular Vosne 1er Cru "Aux Reignots" is now no longer bottled by Bouchard as the vineyard has reverted to Louis Michel - and so technically exists no more under this label. Amazingly it was in pristine condition, now fully mature, and an absolute joy to drink.

Three great reminders of the amazing diversity that wine can offer.

Posted by Liam Cabot at 3:22 PM No comments:

As the Shamrock gets drowned around the World tomorrow, and as the tipple of choice is normally beer, how about this to convince you....


Actually, I stumbled across this by chance. But what fascinated me was that at the end of the clip, some other associated video options popped up and I had a look.

Wow - these guys have a serious chip on their shoulder... or a tongue placed very firmly in their cheek - I'm not sure which to be honest with you. You decide...

As their website says "The main problem with wine is the taste..."

Happy St. Patrick's Day!
Posted by Liam Cabot at 10:31 AM No comments: 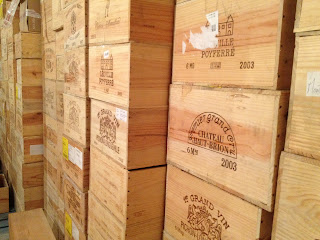 We have poked around the cellar and uncovered bottles of varying age, size, origin and style - and to be very honest, all of them delicious. Once we round them all up, we take a look at them and think what we'd like to drink ourselves - and then we discount them hugely - by anywhere from 25% to 70%. Every year we always get a few of you coming back to us saying "that was delicious, do you have any more...?" - the simple answer in most instances is "No" - this is it, the single opportunity to pick up these wines at this price, and as the saying goes, "when they're gone, they're gone".

So what do we have to tempt you? Well, firstly, the majority of these are all drinking really nicely now - we have made an effort to focus on wines that you can begin to enjoy the minute they arrive. Secondly, we have tried to offer a broad range of styles and countries - we could have done all Bordeaux, but there are those of you (many, in fact) who also like to try something a little different, and this is a great opportunity. So what would I buy?

- 1999 St. Cosme Cote Rotie @ €75 - in my opinion an absolute bargain. Louis Barroul told me a while back that he only had 6 of these left in his cellar - and he owns the place! If he's reading this Blog, he can pick up another three!

- 2003 Pagodes de COS Magnums @ €110 - Parker released his final scores of the Bordeaux 2009 wines in the last few hours. He previously raved about Cos 2003, and has also done so about the 2009, making it effectively disappear from the market. This is the "baby" version of the 2003 - very impressive now.

- 2006 Meo Camuzet Marsanny @ €26 - there are plenty of heavy hitting Burgundies in there, but in terms of price/quality this is a real deal - often overlooked, but wonderful crunchy, lively Pinot.

- 2000 Brundlmayer Riesling Zobinger Heilegenstein Trockenbeerenauslese Halves @ €40 - I just checked on-line and the average price for this comes up as €95! I'm a big dessert wine fan and this is delicious stuff.

- 2003 Istenic Prestige Brut @ €24 - if this was "Champagne" it would all be gone. Made by the country's best producer (and highly regarded internationally), this is a bargain based on place of production rather than quality. A previous Wine of the Week in the Irish Times too!

You can download the offer here: March 2012 Fine Wine Bin End Sale
Posted by Liam Cabot at 2:24 PM No comments: