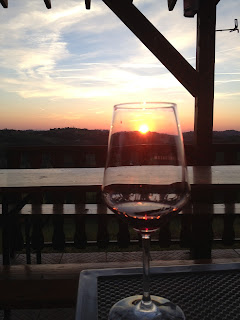 It’s now almost the end of October, and in most wine growing regions in the Northern hemisphere, the grape harvests for dry wines are drawing to a close. The pickers have had their last lunch, gulped back their last glass of fresh grape must and the presses have been cleaned that one last time. The daily ritual of taking readings during fermentation slows – just like a fermentation – and a certain loneliness descends. It’s over for another year…..

But in order for us (and this Blog) to go forwards, we have to go backwards first (hopefully only metaphorically..). The growing season in 2012 was a mixed bag – to say the least. There were more peaks and troughs as the weeks passed than I can remember in a long time.

The season got off to a slightly shaky start after a relatively mild winter. Following a bumper harvest in 2011 of generally high quality, expectations actually weren’t that high for 2012. Irregular flowering in the Spring was a little worrying, but the fruit set was reasonable – and in some ways, pointed to a natural lowering of the yields. Also, depending on the grape variety, irregular flowering can also help to open up some tight bunched varieties such as Sipon/Furmint. So we were relatively happy by early Summer.

As the weeks passed, things looked good. Weather was warm, precipitation was average and both oidium and peronospera seemed relatively benign. Veraison came and went – it’s an amazing thing to see – when the grapes of red varieties turn from green to red – it’s difficult to describe exactly how quick it happens, but you can get up more morning and suddenly notice it has started. One of the amazing tricks that Nature can pull and that reminds you how little we often understand about what goes on around us. For example, why don’t red grapes start out as red grapes – why do they need to change colour halfway through…?


Around this time (July) thoughts also turn to a de-leafing strategy. There are two main reasons for doing this in a vineyard:
The second option, irrespective of your opinion as to its effectiveness, it of course rather difficult to plan for – to the best of my knowledge we’re still a awaiting the ability to see into the future and thus the power of accurate advance weather forecasts still eludes us. But this hasn’t quenched our obsession for just trying to guess what’s coming down the line….. take too many leaves off and get a serious blast of sun (e.g. 2003) and you get burnt grapes, take too little off and get lots of rain and grey days (e.g. 2010) and they never ripen properly.

Anyway, we went the full hog and decided we’d let the wind and sun dance around our bunches’ nether regions… and happily stripped away most of the surrounding foliage from the bunches.

Yet vines are amazing plants – we read a lot about terroir and the suitability of one place or another to host vines, but until you see a really challenging growing season at first hand, you forget how resilient these plants can be – provided they are in the right place in the first instance. We were amazed at how the vines coped – even late into each afternoon, their shoots would still be standing proud, dancing in the breeze, with no sign of wilting.

But there are some vines that are less able to adapt – even if they are on an appropriate terroir. Young vines are particularly susceptible to drought as their root systems haven’t developed sufficiently. In and around Jeruzalem there has been a huge amount of activity planting new vineyards – a sure vote of confidence in the region – and these new vines were severely tested during the dry spell. As it wore on, you could begin to see how the soil in an individual vineyard was responding – the general types are heavy clay and also sandy soils – with vineyards that have both showing a remarkable difference in how they coped.

As the dry spell dragged on, it began to wreak havoc with other crops – corn was particularly badly affected, with many planting just simply shutting down, unable to ripen the cobs. Over in the west of Slovenia, in Primorska on the border with Italy, the drought had a devastating effect on the vineyards as the soil structures are quite different.

But over in our corner in the East, the vines soldiered on very well. However there were some strange things going on in the background. A quick check on acidities showed them to be all over the place. Ripening was far from even. Vines that had been left with a heavy yield struggled to get everything ripe. The difference between “morning” and “afternoon” sides of the same rows became greater.

Sugar levels did continue to rise, albeit slowly. It became clear that much of this rise was more to do with evaporation within the grapes (and thus higher sugar by default) rather than an actual ripening process. The vines had effectively shut down.

And as for our de-leafing strategy? Well, on the Sipon we had some bunches with sunburn (so much for that theory), but mostly we had grapes that had hard skins, with searing acidity. For the Blaufrankisch (Modra Frankinja) things were better: the bunches were more open with a lower yield and no sunburn – although there was a little bit of raisining beginning to set in by the end of August.

Checks at the end of August indicated a very early harvest was on the cards – and one that could be very irregular – acidities and sugar levels were still all over the place.

I was reminded of a marathon – I can cycle until the cows come home, but running still eludes me – but in a marathon people talk about hitting “the wall”. As we came to the end of August, I really felt the vines were hitting the wall – they were tiring from the effort, the ground was parched, the fruit was heavy – and they just wanted to give up.

And then there was word of rain on the way. Never was something so hoped for, and yet so feared at the same time! Too much rain and everything would be ruined overnight – vines drinking up all that moisture and dumping it into the grapes, to have them rupture and rot straight away whilst still unripe. Or too little, and the vines go on struggling and will deliver unbalanced grapes. There was plenty of discussion as to what was the “right” amount of rain to wish for…

In the end, the rain came – and would keep some people happy, and other not so much. Typical of 2012!