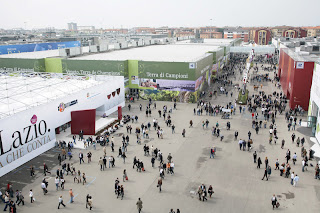 “VinItaly – another love story in Verona” – sounds nice, but does it really mean anything? How much money do you think they spent on dreaming up that little nugget? Anyway, our own love story with Verona was about two hours away as we sat in traffic on the Autostrada from Brescia to Verona. After a particularly wild night out on the tiles in party central Brescia, we decided to set off even earlier to beat the traffic we had encountered on the first day. So did everyone else.

As we sat in the traffic, Sinead decided she wanted to join Twitter. Being a Twitter-virgin, Gay kindly took her through all the steps. After much deliberation and discussion about finding a quirky, memorable and above all, cool name, Sinead plumped for @sineadcabot. Very adventurous. Gay and Sinead then spent the next 20 minutes tweeting each other – from the front seat of the car to the back seat. I can’t see this Twitter thing ever taking off….

We arrived just over an hour late. Friday was obviously a more important day as the organisers had commandeered part of the car park that had been available the day before to facilitate a stream of helicopters depositing VIWI’s (Very Important Wine Importers) – sadly we didn’t spot anyone from Ireland scrambling out of one.

First stop was a Prosecco masterclass with La Riva dei Frati. We have always been big fans of their Prosecco but recent legislative changes in Italy and price rises have strained the relationship a little. In Ireland, we can import a Frizzante D.O.C. Prosecco at the normal Excise Duty rate, but a Spumante falls foul of the double “Champagne” rate. Until recently, producers could bottle their Frizzante D.O.C. with either a Spago (flat cork) closure or mushroom cork – but the Italian regulations now specify that only Summate D.O.C.G. can have a mushroom cork. All reasonable enough until you remember that the producer’s vineyards are all within the Valdobbiadene D.O.C.G. region. So the wine in the Frizzante D.O.C. is effectively exactly the same as in the Spumante D.O.C.G. – yet they want to charge two very different prices. Hence the mild consternation and a reluctance on our part to be charged more for the same thing – just because the regulations changed. The meeting and tasting was very productive – “really good” and “Prosecco” are still rare words in the same sentence, but in fairness to La Riva, they deliver – across their whole range. The tasting and meeting worked for all of us – they now understand our market and pricing concerns a bit better and we understand their desire to create a hierarchical range of Proseccos emphasising quality at different levels. I should have been a diplomat.

After spending far too much time tasting Prosecco, we were now late for everything – with lunch looking like a very distant possibility. A quick stop at a new potential Sicilian producer called Foraci yielded a delicious and well-priced Nero’ d’Avola – a variety with great potential for challenging Syrah as a juicy, flavoursome red.

Onwards to Antonio Fattori – late again. His Pinot Grigio Gregoris is one of our bigger selling Italian whites – a Pinot Grigio that actually tastes of something, yet doesn’t cost the earth. However, to write him off as a producer of large volumes of tasty Pinot Grigio would be to hugely underestimate his skills as a winemaker – and one who is continuously evolving. He was in good form and up for a chat about winemaking, life and the pursuit of happiness – all good things to talk about. First up was a new project – his Soave Runcoris 2010 “Free Wine”. This is a special cuvee produced almost anaerobically and therefore without added sulphites. This is a contentious issue, and I for one do not believe the “all Sulphur is bad Sulphur” brigade and to even raise the topic is a but like jumping into a field of nettles. My biggest problem is not the actual winemaking techniques, which I applaud, but the marketing “image” that goes along with it – and by association, the implication that other wines are less natural, or have much more sulphur. To be clear: this wine has no sulphur added – but it does have natural sulphur of about 17mg/l as a by-product of fermentation. A white wine made by a skilled winemaker who does add sulphur might only have a total of about 25mg/l – of which 17mg/l is natural. Then there is the issue of cellar cleanliness – sulphur can be used as a cleaning agent in a winery – and to produce wines with no added sulphur requires scrupulously clean equipment – so there’s a challenge. So I believe that to label wines as either “sulphur free”, “natural” etc. is disingenuous to the skill and intelligence of the winemaker who actually understands the tools with which they have access to but maybe choses not to market them as such. That said, there is no doubt Antonio is very open about his reasons for participating in the project: he wants to push the envelope – to see what can be achieved. He acknowledges that Garganega is a suitable variety for such a project, whereas a less “stable” variety such as Sauvignon Blanc wouldn’t work. He also points out that overall levels of sulphur use have dropped dramatically over the past few years and that this project is about trying to go that tiny, final bit of the journey to see if it’s possible or not.

As an aside, Gay pointed out that apart from the wine itself, the label might cause a bit of confusion – not of the sulphurous variety, but monetary. He has visions of people wandering into his shop and helping themselves to “Free Wine” – ta very much!

Antonio’s other wines reinforced the image of a winemaker clearly in command of what he does – the “regular” Runcoris Soave 2010 was lovely and the Soave Daniele 2009 (Stelvin closure) was outstanding. As Antonio pointed out (and we agreed) it is just beginning to drink beautifully – just as he has run out of it and moves to the tighter 2010 bottling. He was like a magician producing different cuvees of this and that from behind the table, but none of us expected a Spumante – a lovely, fresh effervescent way to finish the tasting.

Next, it was back to another Prosecco producer, Il Follo. As the issue of price increases and legislative confusion had frustrated us last year, we had gone on the hunt for a less expensive Prosecco Frizzante. In a huge blind tasting, Luca Follador’s D.O.C. Treviso had stood out head and shoulders above the rest. It’s also a Frizzante, but instead of just bringing the second fermentation to 2.5 atmospheres in the autoclave, they allow the pressure to rise all the way to 5 atmospheres (full Spumante / champagne) and then let the pressure dissipate naturally back to Frizzante level. This gives a Prosecco with much finer bubbles and greater persistence in the glass. The overall House style is also a little drier here than at La Riva dei Frati.

By this stage, any hope of chewing on a Panini for lunch had disappeared – so we went to chew on some wines instead with Enzo Boglietti. Since our first tasting of Enzo’s wines over a decade ago (we found the key outside the kitchen door and wandered in to help ourselves), we have been following his progress. He was one of the first producers to use barriques in a complimentary way, not to suffocate the fruit. Yet his wines are big and rich and very modern. Almost too big and rich – after tasting the whole range and a collection of older vintages of different Barolo cuvees, the inside of our mouths felt like we had been eating dry straw for a week. The Barbera 2009 was lovely and savoury, and the elegance of the 2009 Langhe Nebbiolo was captivating. Some of the other wines were almost a bit too much – impressive certainly, but challenging at this stage of their youth. And then, in the middle of the onslaught of extraction and brawny tannins, a wonderfully perfumed Barolo Fossati 2007 jumped out – elegance, persistence and very fine tannins – just lovely. Of the three Barolo Crus that Enzo produces, Fossati is always my favourite.

Sticking with Piedmont, we then headed off to meet with Renato Vacca of Cantina del Pino. Renato is the stylistic opposite of Enzo – his wines are more Burgundian in style, with pure, focussed fruits delivering poised and elegant wines. Only problem was that Renato was nowhere to be found – 11,000 people in a small space doesn’t make for great mobile phone coverage and our attempts to make contact failed. So there was only one thing for it: raid his locker, open the wines and grab a few glasses. Much to the bemusement of the neighbouring stand, we set about our own impromptu tasting – minus the winemaker. The 2010 Dolcetto, aged in steel tanks had nice, dark cherry fruit and a savoury finish. The 2009 Barbera had violets on the nose and soft, fresh fruits – it’s what I’d happily describe as “lip smacking”. The three Barbaresco were all from 2007 – his “normale” and two crus, Albesani and Ovello. We discovered later that we had picked bottles that had been opened the previous day and had no doubt succumbed to the heat of the hall, as they tasted just slightly soupy. Nevertheless, there was great purity of fruit coming through, with a nice hint of minerality and only the slightly disjointed finish pointed to the heat in both the Hall and from the 2007 vintage.

One last stop – and a producer we have always admired from afar: Villa Caffagio. Here they keep things simple – unlike many of their peers who have been seduced by the marketing potential of different “Super-Tuscan” cuvees. Here is it just Chianti Classico, a Riserva and two special cuvees – San Martino (100% Sangiovese) and Cortaccio (1005 Cabernet). All were delicious – managing to combine a depth of fruit flavour with fine tannins and no signs of over-extraction. They had structure, but not harsh tannins and were a lovely set of wines. As someone who is enjoying the odd bottle of their 1999 vintage from a small stash, it was a really pleasurable tasting where, for once, the wines did live up to their reputation.

Not having eaten anything for 11 hours at this stage, we decided it was time to wave goodbye to VinItaly and head back to the bright lights of Brescia. On arrival, we had the best and worst experiences of our short time in Brescia. The best was stumbling across a tiny, dingy bar that seemed to be staffed by an endless succession of old, wiry men who were quite happy to slice salami all evening to accompany many varied glasses of fresh and fruity whites. All their mates were in the back playing cards and the banter was great. The downside was that we left – fuller than intended – to go to a highly rated restaurant we had booked – only to discover that their “unique” offering was beef burgers made from Irish beef served on brown sheets of paper. Not quite Supermacs…. but a posher Italian version.

Was going back to VinItaly a success? Yes, definitely. There’s a lot of good stuff coming out of Italy these days and it was great to get into the thick of it and taste what we already import alongside their peers. We were really happy with what we tasted. Is that smugness? I honestly don’t think so – just a nice reassuring feeling.