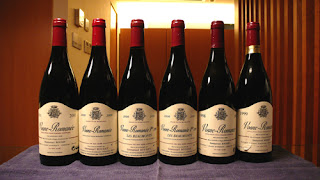 I have been reading about Emmanuel Rouget’s wines for a while now. The thing that always strikes me is that there is always as much comment about his reportedly reclusive and diffident character as there is about the wines!

Emmanuel is blessed – or cursed – by being the nephew of the late, great Henri Jayer. In the 1990’s, due to the byzantine structure of French pension laws, Jayer rented out his vineyards to his nephew Emmanuel. In reality, Jayer kept making his revered wines until 2001, alongside bottlings from Rouget. Many would say that they shared great similarities in style and texture – but unfortunately I don’t have the experience with Jayer to make that comparison. Sadly, Jayer passed away in 2006.

Today, Emmanuel crafts the wines on his own, with thought and natural skill. He has become a bit of an enigma in public-relations terms, shying away from not only media exposure, but also the majority of tasting requests. Hence we ended up outside the gates of his modest house in Flagey Echezeaux in the dwindling light, along with our friends from Justerini and Brooks and also Roy Richards of Richards-Walford (Rouget’s UK agent). Roy knows Rouget well, yet it soon became clear that Emmanuel wasn’t going to come out easily. Possibly he had spotted the dodgy looking group of stragglers at his gate and decided he couldn’t be bothered with a bunch of Irish, English and Slovenes! Phone calls were made – by now it was dark and cold and hanging round gates in Burgundy suddenly seemed to lose all appeal, no matter who was inside. Eventually someone spotted Emmanuel moving shiftily around in the shadows in the yard and almost magically the gates were opened. To say that Emmanuel was disappointed we hadn’t all given up and gone away would be an understatement. He looked positively terrified as we wandered over – plus it became clear very quickly that he hadn’t expected an Irish/Slovene contingent. Roy helpfully suggested to me that we introduce ourselves whilst he mysteriously waited outside on the road and re-tied his shoelaces a number of times. Hew Blair suddenly seemed to be busy on a phone-call to the Queen……

And to all our surprise, Emmanuel smiled and welcomed us graciously! True, there was a little harrumphing and long sighs, but that was just us all trying to squeeze into his tiny cellar. Once ensconced, and with the certainly no-one else was arriving, Emmanuel visibly relaxed and began to take us through the wines. He also seemed to take a particular interest in Sinead, but (for once!) I didn’t mind as the wines were truly great and he was happy to keep going!

He harvested relatively early in 2009, but still sorted the grapes both in the vineyard and back at the cellar. He automatically rejected anything overripe – he said there was fruit coming in with a potential alcohol of 18 degrees! Anything over a potential of 14 degrees alcohol was rejected and then 100% of the remaining grapes are de-stemmed. They are given a 7 day cold soak at 10 degrees Celsius. He also favours using CO2 and allows this to filter through the cold soak to enhance freshness and extract purity from the fruit. Alcoholic fermentations are as short as possible to preserve freshness and he prefers pumping-over the juices, rather than punching down the cap during fermentation. Above all, he makes wine in the style he wants (makes sense I suppose!) with the ultimate objective being wines of freshness, equilibrium and puissance.

The first thing that struck us about the samples was this elegance. Sure, there was ripe fruit and tingling vibrancy – but the elegance was wonderful. The “basic” Bourgogne was fresh and plump, with a hint of chalkiness in the background. Yummy! The Savigny les Beaune also had similar savoury fruits and a great lightness in the refined fruit. The Nuits St. Georges was tighter with black fruits and vibrant fruit. Again the vibrancy of the fruit struck us and Emmanuel explained he doesn’t generally rack the wines – if he can start with clean lees, then there should be no need for racking. The Vosne Romanee 2009, aged in 100 new oak, had an amazing nose of violets and spices, fresh “minerally” fruit with lush, graceful finish. The Vosne Romanee 1er Cru “Beaux Monts” was more reserved, more cherry fruit and creamy palate, but also crisp acidity making it very pretty and almost velvety. The Echezeaux was difficult in comparison to the “lifted” style of the previous wines – it was brooding with dense fruit and some white pepper and spices on the palate. The Vosne Romanee 1er Cru "Cros Parantoux" was back to the more feminine style (what an over-used descriptor!) – lots of wild flowers and herbs on the nose and then clean, fine minerality with fine, edgy tannins to give the whole thing backbone.

There are only two producers of Vosne Romanee 1er Cru Cros Parantoux – and we had tasted the other with Jean-Nicolas earlier. Emmanuel’s sample had more density – but multi-layered density and a luxurious core of bright fruit. It really was delicious.
Posted by Liam Cabot at 11:01 AM