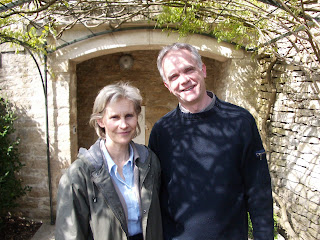 We were three and a half minutes late for Didier and Genevieve Darviot. This is not a good thing as Didier is a very precise man. It was probably because I’d decided to switch the satnav into Slovenian for a bit of fun. Bad move.

Didier’s attention to detail extends from his vines and vinification procedures to the whole environment in which they are gently nurtured through their various stages in his cellar. No spitting on the floor here – and one of the few places where we have seen a specific small tank set aside for topping up barrels. No heating on here either – his cellars are legendary for their coldness and his wines evolve at a glacial pace – malolactic fermentations usually (rather than unusually) taking up to a year to complete. His meticulous attention to detail even extends to preparing a whole range of samples in small half bottles with hand written tags – no pipettes or attacking random barrels.

This fastidiousness can also be frustrating! For his 2007 vintage, Didier took even longer than usual to bottle his wines – and we received them in May 2010! He took the phone off the hook, disconnected the computer and just waited until he felt happy to put them in bottle.

But they are worth the wait. The same precision is evident in the wines – these are finely chiselled – almost subtle, yet very precise – examples of terroir-driven winemaking. Pure fruit is the hallmark here, with well-judged use of varying degrees of oak throughout the range.

For the recently completed 2010 harvest, Didier seemed relatively happy. They started on September 23rd – later than normal (and a common hallmark of the vintage) and yields were down – a low as 25 hl/ha for the whites (based on 10,000 vines per hectare) and less than 20 hl/ha for the reds!

In the vineyards, careful attention is paid to the pruning to achieve maximum concentration whilst not over-stressing the vine. No green harvest or de-leafing for the whites – just some stripping of the foliage for the reds. Following alcoholic fermentation, he does gentle battonage (stirring the wine on its lees) every week until malolactic fermentation. Bottling – as we know – can take a long time. Didier often allows a little residual CO2 to build up in the assembled wines prior to bottling, giving them a nice “prickle” but if this goes too high whilst the wines are waiting in tank, then you need to wait for it to dissipate before bottling. Oak – in varying amounts – is used for all the wines.

We tasted through both the recently bottled 2008’s and the still resting 2009’s. To me, the 2009’s had riper fruit – but firmer acidity. It was a paradox that we were to encounter at a few more addresses – almost as if producers had let the fruit hang a little too long and then had tried to “adjust” the wines slightly. This would result in slightly “unripe” acidity (i.e. added) rather than “ripe” acidity (i.e. natural). Again, I didn’t ask Didier specifically, but he’s a pretty non-interventionist type of character, so I’d guess his acidity was natural.

Overall, his wines have a really nice tangy, ripe lime character – and I like this style as it’s backed by minerality and structure. His 2009 Bourgogne Blanc Vieilles Vignes (of which there are only 4 barrels) is a wonderful bargain – packed full of lemon and lime fruit. The 2009 Meursault “Tessons” had riper fruit character – he practises whole bunch pressing – and veered towards a possible struggle between ripe lime fruit and firm acidity. The 2009 Chassagne Montrachet “Bergerie” – from 100 year old vines – was more restrained on the nose with and more lactic-style (creamy) acid. It had amazing persistence and I preferred it over the Meursault Tessons. Of the Meursualt 1er Crus, his 2009 “Perrieres” is year-in, year-out wonderful. There is much more stony minerality and complex, restrained fruit and a definite finish of wet pebbles – pepped up by a prickle of CO2. The 2009 Chassagne Montrachet 1er Cru “Blanchots Dessus” – from a tiny parcel that literally adjoins the Grand Cru vineyard Le Montrachet, and of which there are also only 4 barrels – was also really minerally. In addition to lime, it also had hints of orange peel and very persistent (but ripe) acidity. More CO2 to pep up your day!

Much to his frustration, Didier produces some very under-rated reds that are often overlooked – in fact I think he produces more red that white in terms of volume. Of course, we’re in the Cotes de Beaune here, so the reds are generally “crunchy” with dark cherry characteristics, rather than the spices and black fruits of the Cotes de Nuits. His 2009 Beaune 1er Cru Bellisands was delicious already – our first taste this year of a 2009 red. The tannins were smooth and the fruit was almost like sweet cherries – but there was also a nice chalkiness to keep it from being too jammy. Lovely.

The 2008’s, by contrast, were all more restrained. The whites tended to be “tighter” and more focussed – with the 2008 Chassagne Bergerie again getting my nod – and the reds were fresher and more nervy than their 2009 counterparts – but also very appealing.

As for when Didier’s 2009’s will actually be in bottle and available….probably some time around the end of 2011, but you never know…..
Posted by Liam Cabot at 3:38 PM