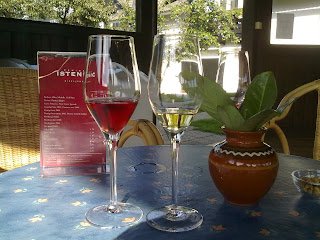 Before leaving Slovenia, Sinead and I went into a bit of a blind panic trying to taste with as many producers as possible. It had been very easy to just focus on our own local region – and forget about some of the other well known areas and producers.
Janez Istenic is justifiably regarded as Slovenia’s leading producer of method traditionelle Sparkling wines. Since 1968 he has been turning them out in Bizeljsko in the Posavje wine region (about and hour South East of Ljubljana). To date he has accumulated 8 Champion titles, 54 Gold Medals and 35 Silver Medals to date. Not bad!

We locked the kids in the car with a DVD player and went to taste…Interestingly, he produces as many semi-sweet sparking wines as dry ones. Semi-sweet would still be a relatively popular style in Slovenia although he acknowledges that the drier style is becoming more prevalent. He also makes two sparkling Rosés and a red sparkling wine made from Pinot Noir and Modrja Frankinja. Given our (well, Sinead’s anyway) obsession for red sparkling wines, we were obviously going to enjoy ourselves!

The conversation was fascinating as well. The average maximum yield is 75 hl/ha which is about a third of what it is in Champagne. Janez isn’t happy about that – he’d prefer a much higher yield so that he can achieve greater freshness and acidity. Interestingly he’s also an advocate of sulphuring the wines (carefully) to avoid any malolactic fermentation – whereas many in Champagne encourage malolactic fermentation. Janez knows his stuff – why wouldn’t he after 40 years – and pointed out that there are some 1,400 different substances in sparkling wines – he didn’t quite name them all, but seemed quite prepared to if we questioned the veracity of this.

Not to be outdone, Sinead then started on her crusade about “what happens to the acidity?” A few weeks previously we had been talking about ripening grapes and the well worn knowledge that as sugars rise, acids drop. “But where does the acidity actually go...?” she asked. Turns out, none of us were really sure – including a number of winemakers. Yes, some of it is “diluted” by the rising sugar, some is converted by “respiration”, but this wasn’t enough for Mrs. C. So after much searching, she found the answer from David Bird’s book about winemaking. Mr. Bird, being a Chemist states that some of the malic acidity is actually converted into sugars – one of the more unusual biological conversions in nature.

So fast-forward to our civilised afternoon tasting with Janez, and Sinead drops this piece of wisdom into the conversation – like an underwater explosion, it took a little time for the impact to be felt. But Janez was having none of it – and a spirited conversation, aided by some very fine tasting bubbles, ensued. As I was driving, I was also the one who had to promise the scan various pages of the book and email them post-haste to Janez for inspection. Oops – that’s something I’ve just realised I need to do….

Back to the wines though. The Presitge Brut Nature is 60% Chardonnay and 40% Pinot Noir, aged for 6 years prior to release. It’s one of the top Cuvees – and stunning. The Cuvee No. 1 sits in the middle tier and has a slightly richer (and possibly more friendly) style with 10-12g of well concealed sugar and is rounded out by 3-4 years of cellaring prior to release. The Cuvee Miha is the sparkling red – very rich and broad on the palate with only a hint of tannins – delicious.

Considering the cost of Champagnes in general – and the likes of Cristal (see earlier post) – these are amazing values. The Cuvee No. 1 is about 50% of the ex-cellars price of a regular Champagne. Would they sell? The professional answer is that “they would be a good challenge”! A few years back we used to import the wonderful sparkling wines made by Italy’s leading producer, Bellavista. They were also every bit as good as most Champagnes, but just didn’t sell. At that price point, people always chose Champagne – primarily as most “regular” Champagne is bought as a gift so people are wary of something that doesn’t carry an identifiable image or price-tag.