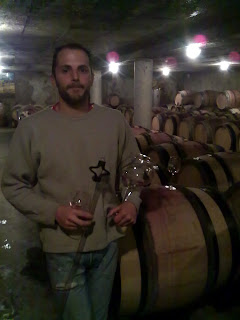 Day Two of our trip and up and out early to the Cotes de Nuits. After the previous day of all whites, we were looking forward to some good, hearty reds - not only to seduce us with the charms of the 2009 vintage, but also to take the chill of the decidedly miserable weather that had descended on the region.

With windscreen wipers going at full belt, we peered ahead through the gloom on our way to Gevrey Chambertin. We started working with the Liveras just over a year ago when we stumbled across the Gevrey Chambertin Clos Village 2007 – an amazing wine for the price – everything you could want in a classic Gevrey – meaty, savoury, ripe cherry-fruit and wonderfully textured.

But that was last year – this year it was the 2009’s that we would focus our attention on. Young Damien Livera, who has been making the wines for the past five years, met us at the cellar. In total, the Domaine farms 8.5 hectares, so is relatively large. On the way into the cellar, we passed a case of what looked like a still Rosé - it’s unusual to see a still Rose and Damien offered us a taste – surprisingly rich, but showing a little heat for the vintage.

In most cases, the grapes are de-stemmed and then have a cold maceration for about a week prior to alcoholic fermentation. This should result in quite “pure” and forward fruit flavours with elegant violet overtones. The 2009 Bourgogne, aged in 4 year-old barrels was good, but a little brawny. The 2009 Cotes de Nuits Villages was crunchy and fresh – in part as the malolactic fermentation hadn’t finished -over a year later! Damien claims to prefer a long malo – but heading into a long, cold winter, I’d be a bit worried about when it might actually finish!

The Gevrey Chambertin “Clos Village” was the first to offer some lovely floral fruit and dense, supple fruit. It is made from 60-70 year old vines in a small walled “Clos” literally just outside the cellar offering a yield of about 45 hl/ha (10,000 vines per hectare). This reassured us all and things looked up from then on. The Chapelle Chambertin Grand Cru – a tiny amount produced and aged in 100% new oak – was super-concentrated and offered great promise down the road. It also showed a hint of one of the challenges that 2009 presented – higher alcohol from higher sugars – in this case a fairly hefty 14.5%.

On the way out, Damien offered us a re-taste of the original 2007 Gevrey Clos Village – and it was as lovely as ever. We asked if he had any more – he did – and we immediately confirmed another small parcel! So much for the 2009’s – we’ll be back for them at another point!
Posted by Liam Cabot at 3:27 PM