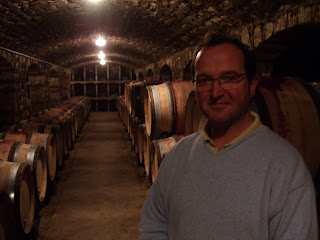 Next up was the modest and talented Jean-Marc Millot. Except that he wasn’t there – he was in the far East showing his wines. It’s a reminder of the growing interest in Burgundy and the very finite volumes available. If the 20,000+ cases of Ch. Lafite produced every year can cause a scramble by the Chinese, what about 200 cases of a top Clos Vougeot? I fear it’s only a matter of time…

We were met by Jean-Marc’s doppelganger assistant, Brice. We assumed it must be his son, but he smiled politely (having obviously been asked many times) and said no.

Jean-Marc is another rising star in the Cotes de Nuits. Over the 8 years that we have been working with him, his wines have steadily improved (although they were very good back in 2002) and his confidence has increased hugely - he even has a silly ringtone on his phone now! The house style here is to exhibit more savoury, open-knit fruit characteristics (different to the “pure” Mugneret fruit). The results are wines that are very friendly in youth, and that then develop good tertiary flavour characteristics in the medium term. They are wines of pleasure.

The Cotes du Nuits Villages is always a great bargain. The 2009 barrel sample had a lovely floral nose escaping from a core of sweet, savoury fruit. On the palate, the smooth, but firm, tannins were there to give it backbone and structure. The phrase “raspberry yoghurt” came from Miro and encapsulated the combination of sweetish style fruit with creamy complexity. His Vosne Romanee 2009 had more cloves and spices on the nose and plenty of violet-infused fruits on the palate – a pleasure to taste. The Vosne 1er Cru Suchots is always one of the most floral on the nose, with herbs and white pepper. It was dark, rich with great length.

Jean-Marc owns a largish chunk of vines in Echezeaux (itself a large appellation) and produces (by Burgundian standards) good volumes at a reasonable price. The barrel sample was very open on the nose – very flattering – but with a meaty, chewy, more complex palate that was definitely more blackberry fruit that red fruit. Even smoky bacon came to mind – the meat, not the fries.

In the same open style, his Clos Vougeot Grand Cru 2009 had a rich, toasty nose – I called it “friendly” which is unusual for a Clos Vougeot at this stage of evolution – and it had ripe almost sweet-cherry-style fruit and an overall creaminess thanks to the new oak. Very good – and just a touch over 13.5% alcohol which was surprising given the “warmth” and richness of the sample.

Overall, a very impressive, lovely set of wines.
Posted by Liam Cabot at 11:54 AM