The Birds - A Hitchcock Horror Story 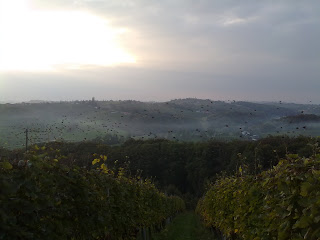 It’s difficult to see from the photo above, but if you look closely you can see some back spots in the sky above the vines. These are birds – thousands and thousands of them – starlings - that gather and circle the vineyards in the late afternoon. Every so often they descend on the vines and, unless disturbed, proceed to help themselves to whatever juicy, ripe, sweet grapes they can find. They have been known to strip a vineyard bare in under 20 minutes. To keep them on their toes, there is the regular “thud” of a bird-scaring apparatus down in the valley – think big Halloween banger, or something similar (I guess) to what they use at an airport.

Of course, the whole irony of the sugar issue this year is that this region is originally made its name with sweet wines. Late Harvested – small amounts of grapes are left on the vines to shrivel, wither and develop the most amazing concentration and then harvested sometimes as late as Christmas Day or even January,

One of the most famous producers, Stanko Curin, is about 500M up the road from us. His Sipon Ice Wine won consecutive Decanter World Wine Awards as best Sweet Wine in the World – beating a pretty serious line-up of Tokaji wines among others. Stanko, now old and a little frail, started bottling his own wines back in the 1970’s – something pretty scandalous in the former Yugoslav regime of President Tito.

Today Curin’s sweet wines are still produced, along with those from many other producers. Volumes are small, from even tinier yields (often just 100ml per vine) and there are some eye watering prices to match – over €150 a bottle. Dry wines have also made an appearance in recent years on the Curin (now known as Pra-Vino) List, much to the initial apprehension of Stanko.

Most producers still make a little sweet wine – although the predominant style is now dry. This year their challenge will be even bigger than normal. Not so much due to low sugar levels – they should eventually get there if you wait long enough – but more to do with the rampant rot that set in following the heavy rains that decimated the volume of grapes available to be set aside - most producers took what they could for their dry wines, leaving very little.

The few grapes deliberately left on the vines to battle it out with the elements over the next 2-3 months will be watched carefully and coaxed towards an icy harvest. So long as, of course, the pesky bids don’t get them first.
Posted by Liam Cabot at 11:08 PM