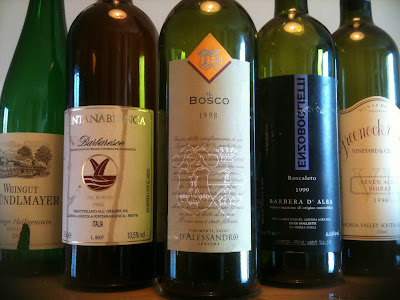 A few nights back we had some winemaker friends over to dinner. The simple deal is that we open some “foreign” wines and enjoy a good night of food, conversation and wine. We did it a few weeks back, but the difference this time was that all the guests kindly brought the food – we just supplied the wine. Maybe the cooking wasn’t up to scratch last time!

We didn’t kick off until 8:30pm given the heat – and even at that point it was still up around 30 degrees. Tasting wines in hot climates is interesting: the reds all taste refreshingly cold – and the whites positively icy! However in reality, the whites are around 14-16 degrees and the reds around 19-20. It just shows you that everything is relative: if we were to drink whites at that temperature in Ireland, they would taste flabby and disjointed. Here, they taste fresh and invigorating (and much more “open”) and the reds take on a delicacy and fineness with wonderful nuances that would otherwise be hidden when tasted “warm”.

To kick off we had a Brundlmayer Zobinger Heilegenstein Reisling 2007 – we used to import Willi Brundlmayer’s wonderful wines and still have some of the 2002 that is drinking nicely. However on this occasion the 2007 was a little lean and lacking somewhat in vibrancy and depth.

Next up – with lamb, potatoes and salad - was a bottle of Fontanabianca Barbaresco Sori Burdin 2006 – one of my favourite “modern” Nebbiolos. Although aged in barriques, the fruit is still intense and tightly wound – still lots more to give in the coming years, but very pleasurable. Then a very great bottle: Tenimenti Luigi d’Allessandro Podere Il Bosco Syrah 1998. I have always been of the opinion that many Tuscan 2008’s are better than their 2007 counterparts – they have better definition and acidity. This proved the point exactly – wonderfully balanced with fine tannins and perfect fruit with a nice hint of gaminess beginning to develop. I can’t remember how or why we acquired a case of this and it definitely lay ignored for many years, but this was a really pleasant surprise. Great syrah from Italy? Really the only other one we’ve had has been the Isole e Olena Syrah – but this was better. Looking forward to the next bottle already!

Following the Italian Syrah, we decided to cross continents and open a Greenock Creek Seven Acre Shiraz 1998. Actually we had the choice of 1998 or 1997 – but the ’97 was labelled as 14.6% alcohol and the ’98 as 12.6% - so low alcohol won the day. It was unfortunately a bit of a disappointment. After the finesse of the Bosco, this tasted monolithic and stereotypically “jammy”. Plenty of ripe, “warm” fruit, but very little definition. I’m not sure if it was just in a strange phase as we have certainly previously enjoyed mature, interesting Aussie blockbuster reds – but this just wasn’t doing it that night.

So a back-up bottle was pulled from the cellar. In fact the last bottle we have of this wine: Enzo Boglietti Barbera d’Alba Roscaleto 1999. For those with long memories, or just egotistical nerdy wine importers like us, this wine was awarded Red Wine of the Year back in 2001 by the Best of Wine in Ireland (now sadly deceased). Back then it was a mini coup beating all the larger importers – and we continue to import Enzo’s wines today. So it has a lot to live up with a group of winos baying for elegance, flavour, evolution, balance and complexity. No pressure then. However it delivered on all fronts – and was joint “wine of the evening” along with the Bosco – and led to a discussion about the sad demise of the planting of Barbera in Slovenia and some mad scheme that we hatched to re-introduce it and take the world Barbera market by storm….. As we headed off to bed with the dreams of world Barbera domination firmly planted in our minds, the thermometer was still showing 27 degrees Celcius!
Posted by Liam Cabot at 5:43 PM