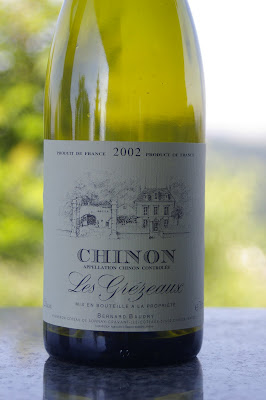 We’re in the middle of an amazing white wine region here, but good local red wines are a little more difficult to come by. Aside from Modrja Frankinja (wait and see – the next big thing!) we tend to find many of them a little austere. So any spare space in the car not occupied by kid’s junk is crammed with some random bottles of red wine before we leave Ireland.

Prompted by John Wilson’s two “Wines of the Week” from Bernard Baudry that we import in the Irish Times in the past couple of weeks – the Chinon les Granges and Chinon Rosé, we thought it would be a good time to try some for ourselves.

We dug deep into out small stash and pulled out two wonderful reds: the first was a Domaine Bernard Baudry Domaine Chinon 2001 which was drinking wonderfully with nice mature flavour characteristics. Amazing stuff for a 10 year old bottle that cost €13.99. The second was another Baudry – this time the Chinon les Grezeaux 2002 – it had more focussed fruit and finer tannins and still has a little life ahead of it – and very impressive too. Both served slightly chilled (relative to the heat) and both stunning examples of how good the very underrated Cabernet Franc can be.

At the moment the world’s wine importers are focussing their attention on the Bordeaux 2009 vintage and the superlative scores (and prices), with Cabernet Franc being hailed as one of the very successful varieties. A few hundred kilometres North in the Loire is a treasure trove of wonderful wines from the same grape at a fraction of the price!
Posted by Liam Cabot at 9:48 AM