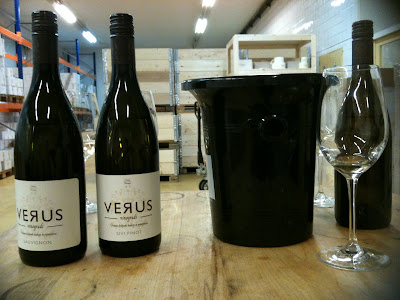 We spent yesterday morning with Bozidar Grabovac from Verus tasting through their 2009 wines, along with comparisons from 2008. We import their Pinot Gris and Sauvignon Blanc and both have been praised by various critics including John Wilson of the Irish Times and Jancis Robinson in the Financial Times. In fact, the critical acclaim has led to some allocation issues, but being on the ground here allows us to hassle them that little bit more!

Verus was set up by three friends and ex-employees of the local Jeruzalem-Ormoz co-op – itself a very successful model of a larger scale operation. Having worked there for many years, they knew where the best vineyard sites were in this small region and set out to acquire them and introduce new viticultural and vinification techniques. In a region that delivered the UK’s No. 1 selling wine 25 years ago – millions of litres annually of the slightly sweet Laski Riesling – change has sometimes been slow to come. Verus, along with Miro Munda and a growing number of others, have taken relatively giant leaps in the way they treat their wines – cold maceration, temperature controlled fermentations, minimal use of sulphur, sterile bottling conditions, stelvin closures etc. The results are a range of fresh, clean whites that jump from the glass and display true varietal characteristics combined with the unique regional aspect.

Overall the 2009’s were a pleasure to taste, although they were a little muted compares to the 2008’s we tasted alongside them. Having just been bottled a few weeks before, they were a little coiled and restrained. The 2009 growing season was very challenging – some severe hail storms in early summer decimated much of the crop and alternating hot and wet spells made for irregular growth. By harvest, volumes were down by up to 50%. The upside is that the wines have good concentration and an unusual complexity and minerality to them – unusual since the soil is mostly heavy clay.

We secured our allocations of the Pinot Gris and Sauvignon and plan to ship – and enjoy – them in the Autumn.
Posted by Liam Cabot at 6:17 PM