Off With Their Heads

Ok, not another rant about Excise Duty – but don’t worry, plenty more of those to come…

For anyone who can follow the bizarre timeline of this Blog, we’re now jumping back in time to May of this year. Readers will know that we had been clearing and preparing a a new vineyard for Modra Frankinja (Blaufrankisch) with a view to planting some 1,600 vines that will bear fruit in three years time – and for many more years to come…

But there’s always a shortcut! The planting of vines – and waiting – is all very much part of the natural rhythm of a vineyard (although there’s plenty of work to be done – big whinge coming up..), but experimentation is also fun!

Fritz Becker in Pflaz had mentioned casually that they were getting some older vines “head” grafted to Pinot Noir – there are various teams of specialist “grafters” who work their way through Europe each Spring and field-graft a chosen new variety onto an existing rootstock. The idea being that the new “vine” gets the benefit of older, established roots (and potential complexity), along with the advantage that the fruit-bearing part of the pant will produce fruit the following year – no 3-year minimum wait!

Apparently it became very popular in California some years back following the success of the film Sideways – Merlot fell out of fashion and growers needed Pinto Noir – and fast! Here are a few pretty enthusiastic converts..

Technically it’s called T-Bud grafting – and there are many varied opinions about how easy or difficult it is to perform – and how indeed to actually perform it in the first place. I came across a couple of videos and the odd document – but after that, there isn’t much other than individual practical experience.

So I decided to give it a go! To say that locals through I was a bit mad was an understatement! Firstly, I had to get some buds for the grafting – and the only place was the nursery where we had just purchased the young MF vines. Essentially I was asking them to give away their product for free – they make their money by doing the grafting over the winter onto young rootstock and here was me going, “can I have some of those buds and I’ll take them away and do it myself please…” But surprisingly, they agreed. Probably because they thought I was mad. 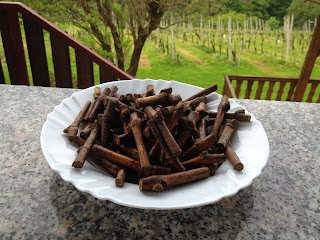 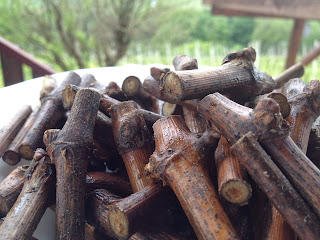 The next challenge came when wielding a saw in the vineyard – quite simply, you have to cut the whole top off the existing vine. No half measures. I have chosen to behead a row of old Sipon vines. A few friends dropped by to see if I really would go through with it – and shook their heads in disbelief. “It will never work….”


Chopping off the tops of the wines wasn’t the problem though. Everything I had read or watched was pretty clear about what to chop, where to chop, what incisions to make in the bark etc. – but all also mentioned “white tape” to bind the graft once completed. But what type of “white tape”? There are many, many options – and of course none seemed suitable! 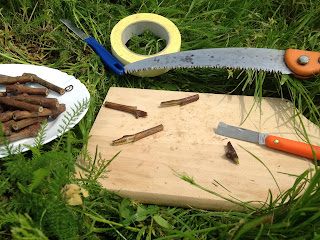 So I started with sliver/back duct tape! Well, it was all I had to hand. Then I realised it might not hold the bind so well in the rain (as the seal needs to be closed to avoid contamination) and I went looking for an alternative option. I settled on masking tape – it has great grip, some elasticity (important as graft grows) and seemed to be pretty weather resistant. 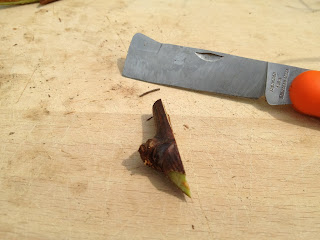 But for any budding (ha – no pun intended!) grafters out there planning to behead your vines I can now exclusively reveal that plain old masking tape will kill the grafts! It must be something in the glue compound, but every single graft I did that was sealed with the masking tape failed. Most of the ones done with the ugly duct tape worked!  Months later (jump forward to August) and some of the grafts are looking really healthy. Next year the will bear fruit. Success!


Some of the older vines better watch out next Spring – might give it another go with proper tape!
Posted by Liam Cabot at 1:10 PM