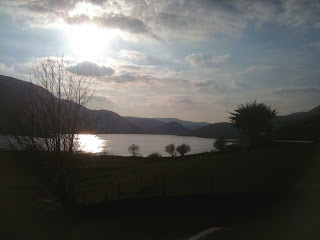 I have been on the road a lot over the past few weeks – travelling the highways and byways of the West with our new Agency List for 2011. Last week I managed to spend three consecutive days in the car, clocking up over 1,000km in the process – whilst the sun blazed down.

On Thursday afternoon I decided to take a back route home and headed from Cong towards Leenane over the mountains and past the tip of Lough Mask and the wonderfully named Lough Nafooey. And I did something I haven’t done for many, many years. I stopped the car and got out. I decided I could live without hearing any more about the Moriarty Tribunal, about renegotiating Ireland's debt, about Chris de Burgh’s offloading of his wine collection, (as an aside: Chris – If you really did get £12,650 for a case of 1945 Lafite, then you were diddled by Christies. Surely a typo? I could have done better selling them on Moore Street on a Saturday morning!) and most of all – I could do without Joe Duffy.

And then I did a second thing – this time never done before. I dusted off the cracked screen on my iPhone and decided I would take some photos – just in case I was dreaming! For 15 wonderful minutes I sat there and decided life was pretty good.

If the country really does go down the tubes, this is where you’ll find me……..

Except next time I intend to be on a bike!
Posted by Liam Cabot at 4:01 PM