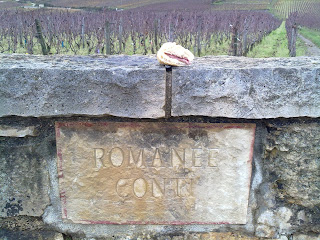 Time for our annual trip to Burgundy to taste, chat, learn and eat more baguettes in three days than the WHO recommends in a year! This time last year we were tasting our way through some very awkward 2008’s (some still hadn’t finished malolactic fermentations a year after harvest!) and a few early samples of rather “jammy” 2009 reds.

What a difference a year makes. The 2008 reds have softened out really well and are very nicely defined – the whites are precise, crisp and edgy. The majority of the 2009 reds have also shaped up very well, displaying nice balance without excessive ripeness or alcohol, but the whites were a little disappointing with some seeming to display the signs of some manipulation to counter ripe fruit and low acidities – with a few notable exceptions. More to follow with individual producer visits.

This year we decided to do things a little differently. Firstly we were joined by two Slovenian winemakers (and good friends) Miro and Samo. It was to be a great opportunity not only to taste plenty of interesting wines, but also to engage in some very interesting discussions that ranged from different winemaking techniques to marketing and promotion of a region as a whole.

The four of us met up in Paris for the TGV journey to Beaune. Given that all the seats are reserved in advance, what are the chances of bumping into another person in the business? Well, much to our surprise, we ended up seated beside Neal Martin of The Wine Advocate. Poor man was trying to write up a report on Madeira and was accosted by two Irish and two Slovenians! Now I commuted from Dublin to Westport for 2 years, 3 times a week and I used to live in absolute fear of meeting people and talking to them for the three hour journey. It got so bad that I purchased Hugh Fearnley Whittingstall’s book on “Meat” and used to carry all 10kgs of it around with me. If an unsuspecting person looked like they were thinking of passing the next 3 hours chatting to me, I’d open the book at the section on slaughtering cattle and sheep (complete with photos). Worked every time. No more chat.

So we promised poor old Neal that we’d only talk for a few minutes – but about an hour and a half later we were still at it! It turned out that we would have a few appointments in common so we swapped opinions and also had a brief masterclass in Tweeting – Neal and Mick Hucknall had been tweeting each other. I also discovered that he (Neal – not Mick Hucknall) is still writing “outside” the Parker empire at http://blog.wine-journal.com/.

For some reason, when I returned from a quick visit to the toilet, Neal had gone back to writing his Madeira article. Funny that… anyway, we bade farewell at Dijon and headed onwards to Beaune – devoid of conversation!

Ahead of us, three days of back-to-back tasting beckoned – complete with tasty roadside baguettes for lunches, mutli-language translation sessions (Engligh, French and Slovenian), a few disappointments, some real highs and a lot of laughs.