The Problem with Cristal.... 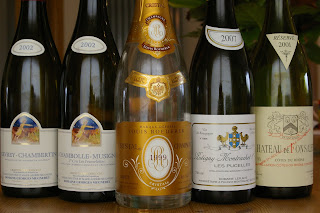 There are many potential problems with Cristal champagne – price, quality and perceived availability – all issues to a lesser or greater degree. But the biggest problem with Cristal at the moment is image. When’s the last time you read a tasting note for Cristal – either on a blog or from a professional critic? It now seems to symbolise the heady days of a time when rappers ruled the world and our only cares were whether we’d have enough time to slow down and take in all the materialistic stimulation we were being exposed to.

On Saturday we had some friends over for dinner and I was rummaging though some bottles in the cellar. I stumbled across a bottle of 1999 Cristal that I didn’t know we had (yippee!) – but that was supposed to be a 1996 (aw shite!). So we thought, why not open it? But then minor panic set in. What would the friends think? They obviously know we work in the business, but opening Cristal on a Saturday night isn’t exactly a weekly event in our house. And then it struck us: how do you go about opening a bottle of Cristal in these economically challenged times without looking like a complete eejit? Of course there are far worse everyday real life problems to have than worrying about opening a bottle of Cristal – but on a micro-economic scale, the potential for a social faux-pas is enormous. People will politely say nice things about the glass of Prosecco you offer them – “much better value than Champagne” etc. – but a bloody bottle of Cristal – how do you get away with that?

Anyway, damn the begrudgers! We cracked it open - to a response of curiosity and a certain element of petrification that at any moment the begrudger police would break through the back door and catch us all sipping Cristal. Oh, the shame….

Was is good? Yes, actually it was. Not quite “one of the finest Champagnes I have brought to my lips” according to the review in the Wine Advocate – but certainly very good. Very refined, with great definition and precision and still very young. And in the overall context of wine, quality and prices – far from the worst deal on the planet.

But the problem is the image. Certainly for the medium term, it’s destined to be consumed among small groups of friends behind closed curtains.

After recovering from the Cristal, we had to calm ourselves with a few other bottles! The Domaine Leflaive Puligny 1er Cru Pucelles 2007 was an infant – but what a wine-in-waiting. It was all about finesse and has incredible delineation in terms of fruit, acidity and raw structure. Lovely. Then on to two bottles from my unashamed favourite red Burgundy producers – the Mugneret Ladies. Their 2002 Chambolle Musigny 1er Cru Feusselottes was divine and it was followed by a bottle of their Gevrey Chambertin 2002. This actually comes from a replanted plot in the section of Ruchottes Chambertin they farm – but as it was fruit from very young vines (2002 was the first year the vinified fruit) it has a “humble” Gevrey Chambertin designation. Actually, there’s an emerging school of belief that maintains that vines actually produce better fruit in their first 2-5 years that at later stages – the conventional wisdom is that young fruit is less complex due to higher yields and a less developed root system to hoover up the terroir. Certainly this was an impressive showing – delicious and some really nice tertiary characteristics developing – and no sign of any “simplicity” from being produced from young vines.

We rounded them off with a bottle of Fonsalette Cotes du Rhone 2001. This was a perfect book-end to the Cristal start. A “basic” Cotes du Rhone that was truly delicious – perfectly evolved and drinking magnificently – with a wonderful story and great winemaker.

It just shows you, the label isn’t everything….!
Posted by Liam Cabot at 7:48 PM